Are you looking out for XPath jobs? Have you applied for the jobs and now awaiting the interview? Are you worried about the type of XPath Interview Questions that could be asked of you? Are you looking out for a platform to practice the questions? Then you are going the right way. Check out this compilation of handpicked XPath Interview Questions to get a better idea of the type of questions that would be asked. Answers are also provided, along with the questions for your practice.

XPath is a computer programming language that stands for XML Path Language. It is the XSLT standard's major element. XPath enables flexible navigation through attributes and elements in an XML document. The nodes are identified and navigated through "path-like" syntax in an XML document by XPath. Over 200 built-in functions are contained in XPath. The World Wide Web consortium developed the XPath, and it appeared first in 1998.

As we have gained the basic idea of XPath, let us move ahead and look at the XPath Interview Questions- updated (2022) and Answers respectively for each of the following categories-

XPath Interview Questions and Answers for the Freshers:

1. What is meant by XPath axes?

We use XPath axes for identifying the elements by their relationship, such as child, parent, sibling, etc. It is just like the way in which the location of the node is defined by the path. 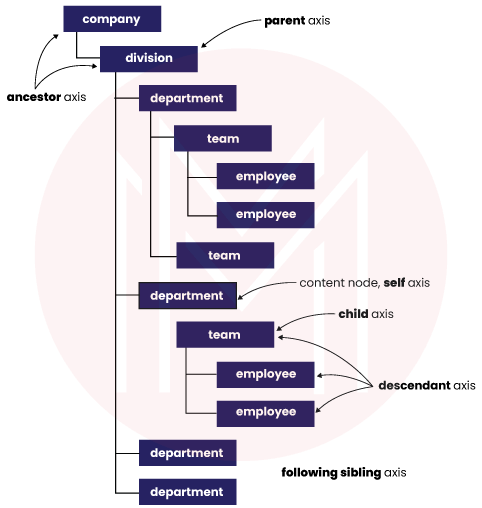 3. What is meant by XPath operators?

Functions and operators on nodes are defined by XPath. A string, node-set, a number, or a Boolean is returned by the expression of XPath.

4. What are the different kinds of operators provided by XPath?

There are different categories of operators in XPath as per their properties. And the different types of XPath operators are given below-

5. How is the relationship among nodes defined?

The nodes that are available in XPath are given below. And these are related to each other in a structure like tree. The nodes are-

6. What is meant by the comparison operators provided in XPath?

7. What is meant by the number of operators provided in XPath?

8. What is meant by the boolean operators provided in XPath?

The Boolean operators are the simple words that are used for combining or excluding keywords. They include OR, AND, NOT, etc. They are used for connecting our search words to either expand or concise our set of results.

9. What is meant by the number of functions provided in XPath?

The number functions in XPath are used for fetching the different kinds of values from the expressions. The examples include ceiling value, example, floor value, etc. XPath provides four types of number functions, and they are given below-

10. What is meant by the string functions provided in XPath?

Some rules are specified by the XPath string functions, which we use for getting strings according to our preferences. 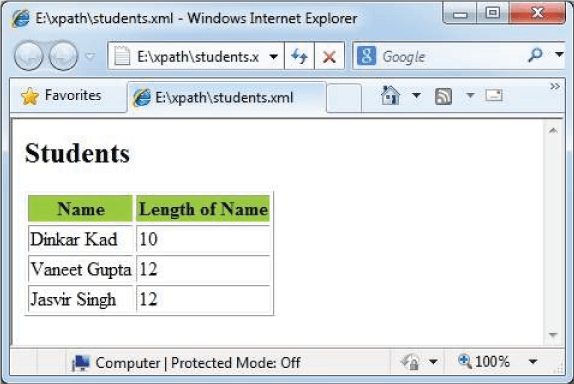 11. What is meant by an atomic value in XPath?

The nodes that have no child node or parent node are referred to as Atomic values.

12. What is meant by the XPath predicate?

The XPath predicate is the XPath expression that is written in brackets. The selected nodes are restricted in a node-set for some conditions.

13. How can XPath be executed in Jquery?

14.  Give an example to illustrate what is parent in a code.

Here, the book element is the parent of title, author, year, and price.

15. Give an example to illustrate what is an ancestor in a code.

Here, the bookstore element is the ancestor of the book, title, author, year, and price.

XPath Interview Questions and Answers for the Experienced:

1. How is dynamic text handled in XPath?

The text function finds the elements with the help of the text present in them.

But contains function has to be used along with text function when the text is dynamic. And some part of the string needs to be static for this to work.

2. When is the position function used?

3. Can the XPath be used inside a frame?

The frame is nothing else but another webpage which is shown as a different web page. Therefore, we can use the XPath just like a normal web page once we go into the frame.

4. Write the XPath for a button.

The XPath for a button is written as given below. The button can be formed in two ways- by using input tag or button tag.

5. How are the lower and upper case attributes handled in XPath?

The @method can be used for an attribute. But the @method might not help us in case the attribute value keeps changing from lower to upper case or the mix of changes. In such situations, the case (lower/upper) should be ignored.

6. Differentiate between XPath and CSS.

7. What is meant by an XPath query?

We are allowed to select nodes from a document through the expression in an XPath query. For instance, all the elements with a "text" tag can be asked and then filtered by the opening tags.

An XPath query is a bit more complex than an XPath location path as some form of search and logic is required for identifying what nodes are desired. These are useful expressions resulting in Boolean values- true/false by which the nodes are returned on the condition satisfaction.

8. Which XPath function can be used for removing unnecessary white spaces in a string?

We can use the normalized-space function for stripping white space from a string and replacing sequences of white space characters with a single space. And then the resultant string is returned.

10. How are unknown nodes selected in XML?

We use XPath wildcards to select unknown XML nodes-

11. What selection will be made if you use "child::book" and "attribute::lang" respectively?

child::book- Here, all book nodes that are children of the current node will be selected.

attribute::lang- Here, the lang attribute of the current node will be selected.

12. Differentiate between XSLT, XPath, and XQuery.

XSLT is a language that is used for transforming XML documents.

XPath is a language that is used for navigating XML documents.

XQuery is a language that is used for querying XML documents.

13. Give an example of the usage of a predicate.

Here, the element <softwareTester> with the attribute – T1 will be selected.

//@* - All attributes within the XML document will be selected.

//@id – The id attribute within our XML documents will be selected.

It will result in the selection of all the title elements having a "lang" attribute with the value - "en."

1. List a few languages in which the XPath expressions can be used.

2. Which major companies use XPath?

The major companies that use XPath are-

Some of the major features of XPath are enlisted below-

4. What are the main benefits of XPath?

The main benefits of XPath are given below-

5. What is meant by XPath expressions?

The nodes and node sets are selected in an XML document by these path expressions or patterns. XSLT uses these patterns for performing transformations.

6. What are the types of nodes available in XPath?

Seven types of nodes are specified by XPath as the output of XPath expressions' executions. The list is given below- 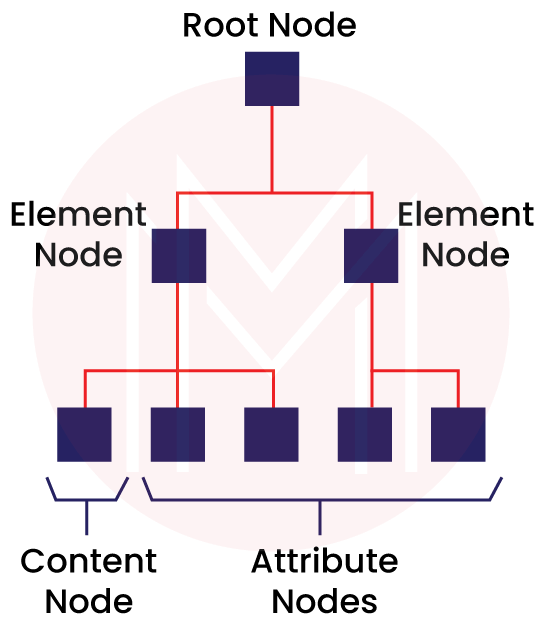 7. How many location path types are available in XPath? Name them.

There are two types of location paths that the XPath provides. They are as follows-

8. What do you mean by XPath syntax?

Different nodes, predicates, path notations, path expressions, and URLs are specified by the XPath syntax, which we can use for defining the XML document.

9. What are the different types of standard functions provided by XPath?

There are more than 200 built-in functions available in XPath. And we can use these functions in string values, boolean values, date and time comparison, numeric values, sequence manipulation, etc.

10. What happens when the top-level element is present in XSLT?

It is relatively easy to write program phrases than to understand the XML- style as well as the sequence of each word in a document. Also, a high level of abstraction could be easily understood and handled through XPath. This makes it an important part of XML that is cherished by all its users. Therefore learning XPath proves to be a great asset. And we hope that we were successful in helping you revise the XPath Interview Questions through this compilation.