A student at the school level will answer this as “Selenium is a chemical element with an atomic number 34 in the periodic table”, but the same student finds a different answer for it when he lands in the technical environment. So, what is that different answer? The answer is simple, Selenium is an automation testing tool for web applications.

Before traveling into this blog of Selenium automation testing, you must be introduced to some basics such as:

So, let us begin with the Selenium definition first, which I am going to talk about in the section below.

What is Selenium? - Introduction to Selenium

The first Selenium testing tool was developed by Jason Huggins in the year 2004 who was an engineer at that time at ThoughtWorks. As a part of his work on testing web applications, Jason has realized that manual testing has become more inefficient due to repetitions of the same test cases. 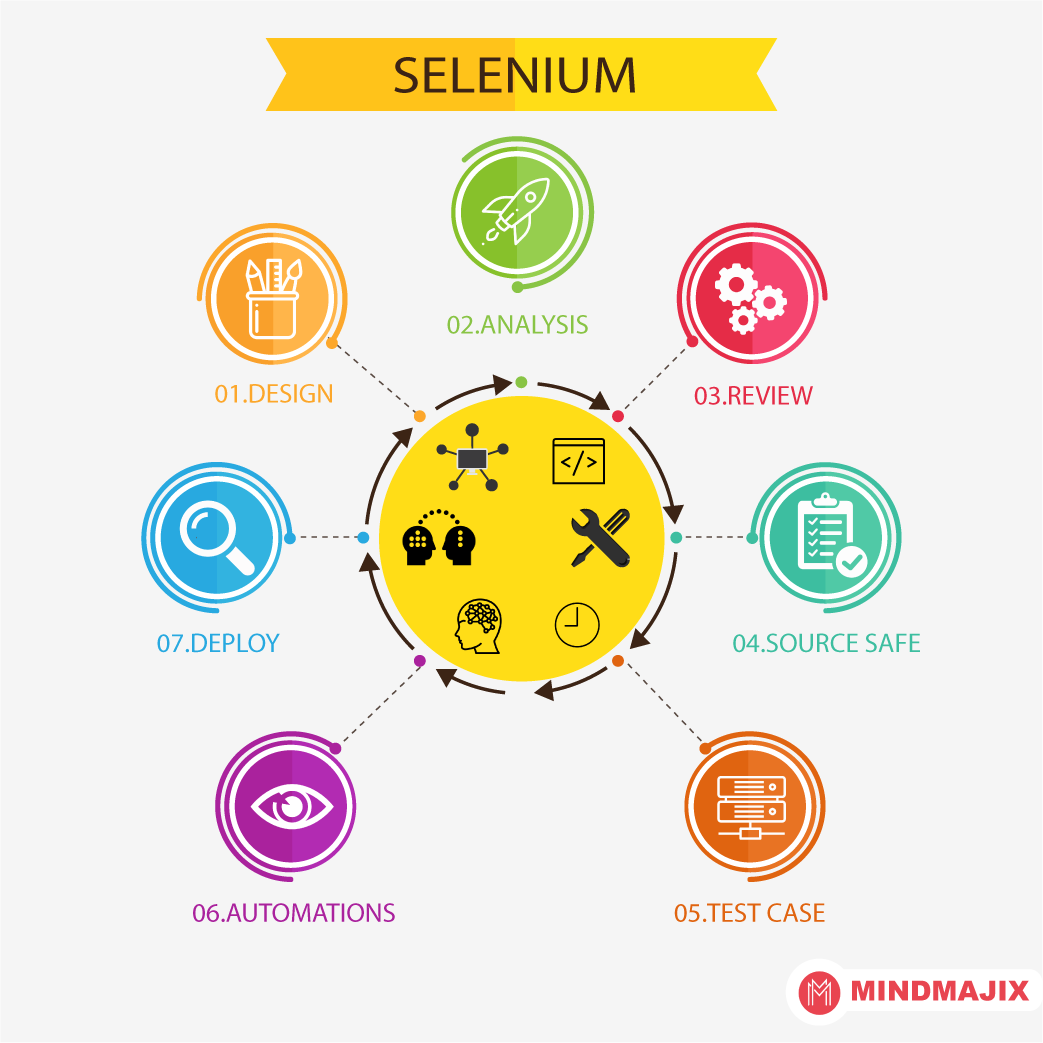 Have you ever thought of why testing plays a critical role in the software development lifecycle? Have you ever heard of automation testing? If yes, then you might be aware of what Selenium is. Selenium is considered as a counterpart of Automation testing. If no, then it is time for you to go ahead and get a read on this entire article to understand the importance of Selenium in the IT world. This can change your career drastically and put you on the map of the IT industry.

Software testing is a very critical factory for a successful software product run. It must be tested thoroughly before delivering it to users for the software product’s effective performance. All the software in markets are properly tested, yet they have defects. It is very important to deliver the software without any defects and all test engineers try to catch them before software release to avoid any issues in the future. Automation testing has become very famous due to its various advantages. It increases the effectiveness and efficiency of the software.

Selenium is one of the widely used automation testing tools because of its various advantages. Testers prefer Selenium over any other tool due to its ease of use, availability, and simplicity. Testers' lives have been made easier with the introduction of Selenium for automated testing. It has attracted many eyeballs and has become a favorite tool among automation testers.

Selenium Tutorial | What is Selenium |  Introduction to Selenium

What is Software Testing

In simple terms, one can define testing as checking or measuring the quality, reliability, or performance of a product before making it available for normal use. For example, most of the products ranging from a small pin to spacecraft are tested before they are made available.

Today, we are in a world of technology dominated by software-powered machines and applications. We expect them to work as we want every time and everywhere. Are we sure will they work? The answer lies in Software Testing.
Software Testing can be defined as investigating or checking the quality of software applications before their release to the user. The same testing is applicable even for web applications as most of the businesses today are internet or web-based. So why should we do testing for web applications?

Imagine a scenario where you place an order online shopping, but you are not able to track the status of your order. This may be due to a bug or error in the web application’s backend code. So there is a need for testing the code to avoid such bugs or errors. Selenium tool offers such testing for web applications.

Traditionally software testing is carried out by Quality Assurance (QA) personnel by writing specific lines of code usually called, test cases. These test cases must be executed manually for every transaction using different types of attributes and datasets. The result of the test cases, either success or failure must be recorded manually. The major drawback of manual testing is the high chance of human errors while the repetition of test case execution results in low product quality.

The drawback of manual testing resulted in automation testing where a tool is used to execute test cases avoiding manual interference for every transaction. Further, we can configure the test cases so that they can be tested irrespective of operating systems, platforms, and web browsers. The result of a test case can also be automated by scheduling it to a particular time of the day.

Why the Name Selenium

The name Selenium has been adapted from a funny mail sent by Jason to his team. During the development of Selenium, there was a popular testing tool by a company named Mercury Interactive (it was the same company that developed QTP and later it was sold to HP). Since Selenium cures Mercury poisoning, Jason has suggested the same name. The team has adopted it and it is how Selenium got its present name.

It is proper to call Selenium as Selenium Suite since it is a collection of four different tools or components namely.

Selenium Integrated Development Environment (IDE) is the only simplest and easy to learn component or tool in the Selenium automation testing suite. IDE is a Firefox plug-in which can be installed easily to record and execute frequent test cases quickly. The user interactions with the web browser are recorded and test cases are created based on these recordings. You can playback these test cases repeatedly. Though Selenium IDE is simple, it cannot be used as a prototype for writing advanced test cases.

Selenium Remote Control has been developed to overcome the issue of the Same Origin Policy (SOP). Under this policy, a JavaScript code cannot access the elements of other domains that are different from its parent domain. For example, if a JavaScript program uses a code written for our site www.mindmajix.com, then SOP allows it to access the pages site such as mindmajix.com/all-courses or mindmajix.com/blog, prohibiting access to other domains like google.com.

Before Selenium RC came into existence, testers used to locally install the copies of Selenium Core and web server with web applications to be tested so that, they both would belong to the single domain.  Observing this, Paul Hammant, another engineer at ThoughtWorks, created Selenium RC which turned out to be the permanent solution for the problem of the SOP.

How does Selenium RC solve the SOP issue?

Selenium RC tricked the browser to believe that both Selenium Core and the webserver with the web application to be tested belong to the same parent domain. This has been achieved by involving a proxy HTTP server making RC as a dual-component tool – Selenium RC Server and Selenium RC Client.

Selenium RC was the first flagship testing tool of the Selenium project which allows users preferred languages to write the test cases. Selenium RC 2.25.0 supports the following list of languages –

So, it is also called Selenium. But, the major drawback of RC is, it consumes more time for every server communication taking hours to complete even a single test.

Unfortunately, due to the depreciation, Selenium RC has been renamed as Selenium HQ and shifted to a legacy package. It means, we can still work with Selenium RC, but no support can be availed for it. You may be wondering what would be the replacement for RC.

Selenium WebDriver was created by Simon Stewart in 2006 as the replacement for Selenium RC. Unlike IDE and RC, Selenium WebDriver provides an interface for creating and executing test cases. These test cases are created in such a way that, web page elements can be easily identified and necessary actions are performed.

In 2008, Selenium WebDriver has been merged with Selenium RC and evolved as a more potent tool called as Selenium 2, keeping WebDriver as the core. So, Selenium WebDriver can be called as an upgrade version to RC as it employs a contemporary and consistent browser automation approach. WebDriver is much faster than RC because it directly calls the browser whereas RC needs a server to interact with the browser and depends on JavaScript for automated web application testing. Each web browser has its own WebDriver such as,

Selenium WebDriver supports languages similar to that of Selenium RC:

Selenium Grid is one of the Selenium testing tools used in combination with Selenium RC to execute test cases remotely. It was created by Patrick Lightbody to deal with the minimization of execution times of test cases. Selenium Grid was initially named Hosted QA and was a part of Selenium 1.

Selenium Grid uses Hub-Node design to support the parallel execution of multiple test cases on multiple machines that are remotely located. In Hub-Node design, one machine is treated as Hub which controls the test cases running on different browsers inside different operating systems. The other machines are treated as Nodes on which test cases can be written in user preferred programming languages.

Here comes the end of the basic introduction of the Selenium QA tool and its components. Now you will be introduced to other testing tools apart from the Selenium tool and why Selenium is the best among them by comparing the top five testing tools.

Why Selenium is the Best Automation Testing Tool

From the above comparison, it is clear that the Selenium QA tool has more advantages than other testing tools. The following shows you the pros and cons of each Selenium component and the overall advantages of the Selenium automation testing tool which makes it the best among other tools.

What are the advantages and disadvantages of selenium Components?

Advantages and Disadvantages of Selenium IDE

Pros and cons of Selenium IDE are as follows:

Advantages and Disadvantages of Selenium RC

Pros and cons of Selenium RC are as follows :

Advantages and Disadvantages of Selenium WebDriver

Pros and cons of Selenium WebDriver are as follows:

Advantages and Disadvantages of Selenium Grid

Selenium Grid has the following pros and cons:

What are the Advantages and Disadvantages of Selenium?

Apart from the above advantages, the Selenium testing tool has some shortcomings such as,

Selenium testing tool has both advantages and shortcomings in comparison to other automation testing tools. But, Selenium overshadows other testing tools in areas of –

On the conclusion note, the above three major features of Selenium and its different components made Selenium one of the best automation testing tools.