If you are looking for Best Practices for Performance Tuning in SSAS Cubes, you are in right place. Define cascading attribute relationships, for example, day > Month > Quarter > year  and define user hierarchies of related attributes (called natural hierarchies) within each dimension as Appropriate for your data

Remove redundant relationships between attributes to assist the query execution engine in generating the appropriate query plan. Attributes need to have either a direct or an indirect relationship to key attributes, not both.

Place measures that are queried together in the same measure group. A query that retrieves measures from multiple measure groups requires multiple storage engine operations

Minimize the use of large parent-child hierarchies.

In parent-child hierarchies, aggregations are created only for the key attribute and the top attribute (for example, all attributes). Unless it is disabled.

If you want to enrich your career and become a professional in SSAS, then visit Mindmajix - a global online training platform: "SSAS Online Training" This course will help you to achieve excellence in this domain.

Define aggregations to reduce the number of records that the storage engine needs to scan from disk to satisfy a query.

Define partitions to enable analysis services to query fewer data to resolve a query when it cannot be resolved from the data cache or from aggregations. Also, define the partitions to increase parallelism when resolving queries

Too many partitions cause a slowdown in metadata operations, and too few partitions can result in missed opportunities for parallelism

Remove empty tuples from your result set to reduce the time spent by the query execution engine serializing the result set.

Rewrite these queries using the SCOPE function to quickly reduce the calculation space to which on MDX calculation refers.

Use EXISTS rather than filtering on member properties to avoid a slow execution path. Use the nonempty and exists functions to enable the query execution engine to use bulk evaluation mode.

Rather than using the lookup cube function, use multiple measure groups in the same cube wherever possible.

You can frequently use the descendant's function to resolve arbitrary shapes by using a smaller number of subqueries than queries than returning the same result that is written using other functions.

Rewrite MDX queries that result in excessive perfecting where possible. Perfecting is a term used to describe cases where the query execution engine requests more information from the storage engine that is required to resolve the query at hand for reasons of perceived efficiency. 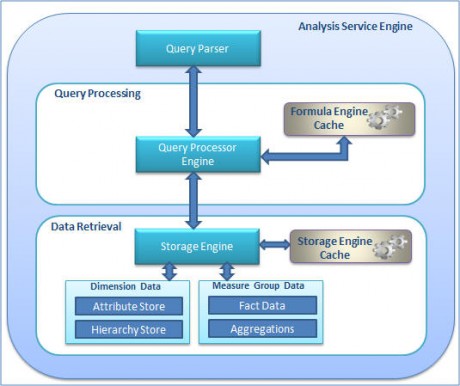 5. Use The Query Engine Cache Efficiently

Ensure that the analysis services computer has sufficient memory to store query results in memory for re-use in resolving subsequent queries.

Define calculations in the MDX script have a global scope that enables the cache related to these queries to be shared across sessions for the same set of security permissions.

In some cases, you can rewrite queries such that they can be resolved entirely from the cache by using a subselect in the From clause rather than a WHERE clause. In other cases, a WHERE clause may be a better choice.

Note that incrementally updating a dimension using Process update on a dimension drops all flexible aggregations affected by updates and deletes and by default, does not re-create them until the next full process

Use Microsoft windows advanced server® or Datacenter server with SQL server 2005 enterprise edition (or SQL server 2005 Developer Edition) when you are using SQL Server 2005 (32-bit) to enable Analysis services to address up to 3GB of memory.

Reduce the value of the memory/Low Memory limit property below 75 percent when running multiple instances of analysis services or when running other applications on the same computer.

Reduce the value for the Memory/Total Memory limit property below 80 percent when running multiple instances of analysis services or when running other applications on the same computer.

When query thrashing is detected in a multi-user environment, contact Microsoft support for assistance in modifying the memory heap type.

To increase parallelism during querying for servers with multiple processors, consider modifying the thread pool query Mastheads and Thread pool process max thread options to be a number that depends on the number of server processors.

A general recommendation is to set the thread poolQuery Mastheads to a value of less than or equal to two times the number of processors on the server.

If you have an eight-processor server, the general guideline is to set this value to no more than 16.

A general recommendation is to set the thread poolprocessmastheads options to a value or less than or equal to 10 times the number of processors on the server.

This property controls the number of threads used by the storage engine during querying operations as well as during processing operations.

If you have an eight-processor server, the general guideline is setting this value to no more than 80

Use a 64-bit architecture for all large systems.

Add memory and processor resources and upgrade the disk I/O subsystem, to alleviate query performance bottlenecks on a single system.

10. ScaleOut When You Can No-Longer Scale Up

When using a cluster of analysis services servers to increase query performance, perform processing on a single processing server and then synchronize the processing and the query servers using the XMLA synchronize statement, copy the database directory using robo copy or some other file copy utility, or use the high-speed copy a facility of SAN storage solutions.