Normalization and T-SQL in SQL Server

In this topic, let us try to understand the intrinsic details of what database normalization is and also, at the same time, we will try to understand the concepts of T-SQL in Microsoft SQL Server. Though the first concept is more relevant to almost all the relational databases available in the market today, the second concept that we would be discussing here would be very much specific to Microsoft’s SQL Server database alone. Let us go through these two concepts in detail and understand these to the core.

If you would like to Enrich your career with an MSBI certified professional, then visit Mindmajix - A Global online training platform: “ MSBI Certification Training Course ". This course will help you to achieve excellence in this domain.

To understand the term normalization in a generic sense, it means to bring something to a normal condition or state. But this term has a very specific meaning for it in the areas of Databases. Hence, let us try to understand the concept of Normalization in the context of databases. Database normalization is the process of reorganizing data in a relational database in accordance with the series of so-called normal forms in order to reduce the amount of redundant data and also, at the same time, to improve upon the data integrity. The two principles that govern the process of Database Normalization are:

Database normalization was proposed and invented by Edgar F Codd and is an integral part of his relational model. He is also considered the Father of the relational data model. Almost all the relational database engines that exist today still use the rules laid by him. As per the rules laid by him, he had extracted the first 3 Normal Forms (acronym as NF) – namely 1NF, 2NF, and 3NF. He had proposed the theory of Normalization with the introduction of First NF and then continued/extended the theory with the Second and Third NFs. This theory had then been extended with the help of Raymond F Boyce to form the BCNF. We will discuss these in further detail in the following sections for better understanding.

What are the types of Normalization?

These definitions would help in understanding the concepts of a table, database and etc. Please take a look at these if you feel are required: 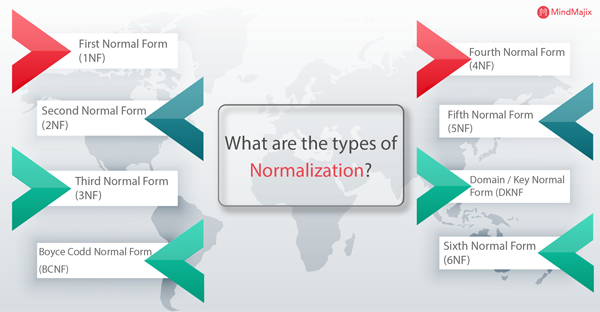 What is T-SQL used for?

We have already discussed in the earlier sections that T-SQL is a proprietary version of SQL standards for Microsoft SQL Server just the same way as PL/SQL is for Oracle database. An individual can create the required T-SQL units such as any other SQL scripts, Triggers, Functions or Stored procedures etc. to cater to specific requirements. Hence, to cater specific requirements on SQL Server, there can be specific code written such as a Trigger to handle the audit on a specific table or something.

Such requirements can be handled on the SQL Server instance itself using some SQL code, since SQL Server has its own notion of its syntax in the form of T-SQL – the database artifacts thus created would be called T-SQL pieces of code rather than SQL code. Mentioning it T-SQL, you’re drawing a definitive line of difference that it works only with SQL Server and may / may not work with the other database vendors – as there can be changes to the syntaxes, functionalities that are not made available for usage and the like.

What is T-SQL vs SQL?

Advantages of Normalization and T-SQL:

There are numerous advantages that are available for us to discuss here and we will just do that. Let us take a closer look at the advantages that Normalization provides us:

Let us now take a closer look at the advantages that T-SQL provides us:

In this article, we have tried to understand the concepts of Normalization and T-SQL (pertaining to MS SQL Server). We have also gone through the various available forms of normalization in a RDBMS system. We have tried to focus on the features that T-SQL has to offer and also have gone through the advantages that it brings to the table with its usage. On the whole, these two concepts put to use in an efficient manner will offer greater performance to your application.

We have taken utmost care to provide you best of the details, but we would still encourage you to go through the official documentation for the latest updates as things are getting changed at a quicker pace. Hope that you have got all the details at once and hope all the details provided were of good use as well.