Choosing the right framework for any website, JavaScript system, or application is a top priority for any business. ReactJS and AngularJS are the two highly performing and advanced development technologies worldwide. Angular was developed by Google and was released in 2010. The first version of Angular is AngularJS. While React was developed by Facebook in 2013. Learn major differences & key factors comparison - React js vs Angular js

#Interested to learn more about React framework - Then check out our React Online Certification Course to gain expertise to build React JS Applications.

ReactJS vs AngularJS: Difference Between React and Angular

In this article, we’ll provide a detailed comparison of how ReactJS and AngularJS intend to solve similar front-end development challenges, but with a difference in approaches.

So, let us begin with the ReactJS definition first, which I am going to talk about in the section below.

React.js is a JavaScript library used for developing UI interfaces or UI components. React is easy to understand compared to Angular. It is actively supported by a community of developers and companies.

Are you intereted to learn more about React Framework , then check out our Blog  - React JS Tutorial

AngularJS is a typescript-based, open-source web application framework for front-end web development. It is actively supported by Google and an individual community of developers.

It is a fully-featured javascript framework that is used to develop dynamic applications using HTML syntaxes.

The below points will help you understand the differences between both of them based on a few parameters.

Angular is a full-fledged framework, which can run on any platform or browser.

Pros and Cons of React JS

Popularity and growth of Angular JS vs React JS

The more popular technology is more job opportunities. React already has more GitHub repositories compared to Angular with most Fork and view rates.

According to NPM trends, there is a significant difference in the number of downloads between React and Angular. React is the most downloaded framework with more than triple times than Angular. 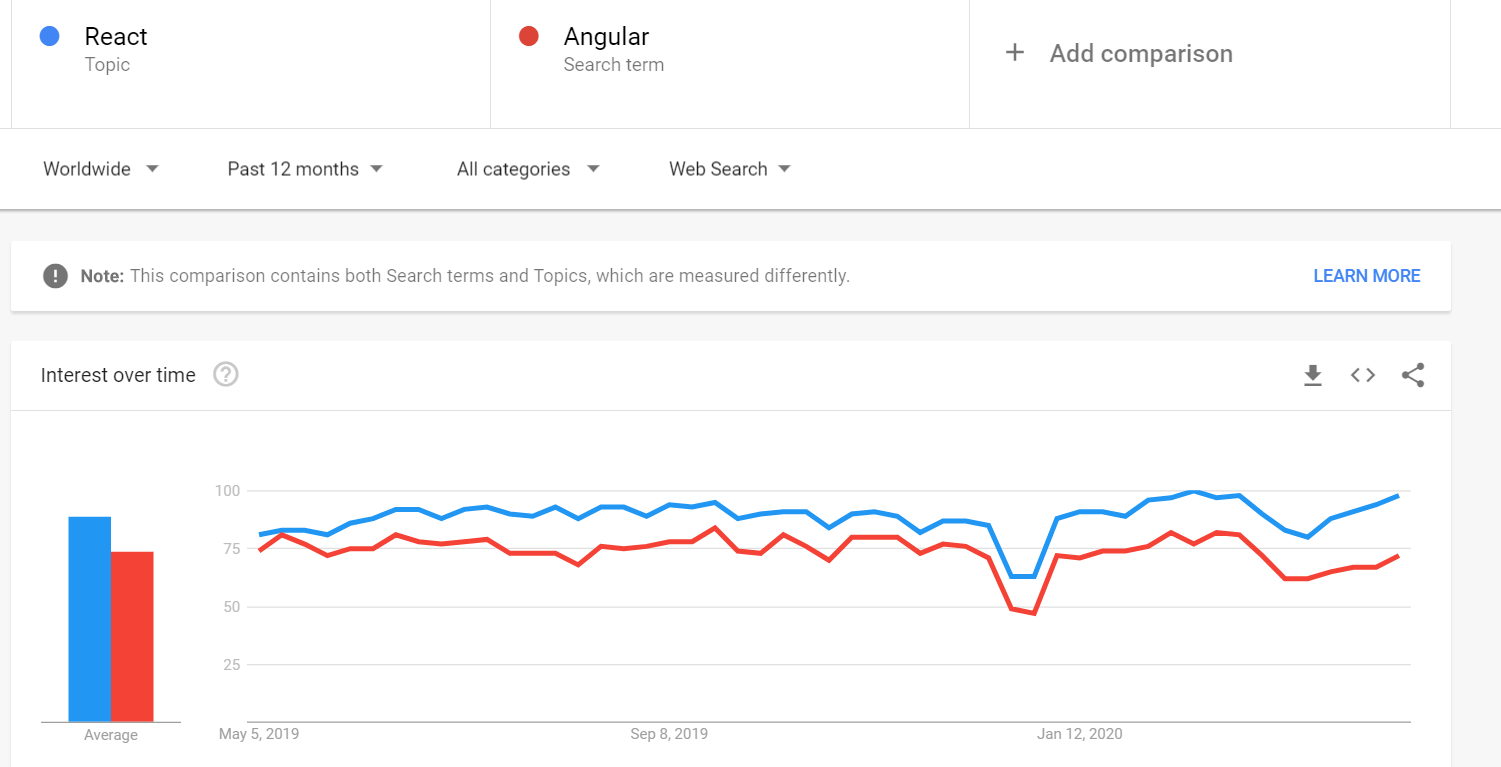 According to the above metrics, it is crystal clear that React is more popular than Angular.

The high scale companies in the world using React and Angular are listed below:

Both ReactJS and AngularJS can be used for developing mobile applications.

In ReactJS, React native platform is used for creating native mobile applications and allows local user interface enabling developers to make their own parts and tie them to local code. The syntax used in React is slightly different from Ionic’s syntax.

In order to develop hybrid mobile applications in Angular, the Ionic framework is used. It offers a robust UI component library that is easy to set up and develop hybrid applications. Compared to react, the apps built on Angular are quite slower.

Neuvoo reports state that the average pay for an Entry-Level Front End Developer is around $115,000 approx annually, while the most experienced can make up to $156,000 per annum.

According to tech trends, there is close competition in the job market for both Of these frameworks.

However, Angular has a slight upper hand over React.

Conclusion: Which one is better ReactJS or AngularJS?

Well, that completely depends on your project requirements and goals. Both Angular and React frameworks have their own benefits and challenges.

Considering all the features mentioned above, therefore you should consider React, if you are new to programming or having less coding experience, since it is easy to learn and popularity is more. The market demand is a lot higher than Angular and also it can be used to develop single-page applications too. Along with, for every six to seven months duration, there will be new upgrades in Angular and it's quite difficult to learn.

But if you are looking for a full-fledged framework to develop large-scale projects and like to follow coding strategies then without having any second thought you can go to Angular.