What Led To The Popularity Of AngularJS?

AngularJS is an open-source front-end web application framework that is used mainly for developing single-page applications and maintained by Google and a group of individuals and enterprises.

It is a widely acknowledged fact that AngularJS is now considered as one of the most popular frameworks with its bunch of advantageous features like its extensibility to HTML, CSS, JavaScript, etc. The growth of this client-side technology bag all those effective features that can be helpful in developing web and mobile apps. Another effective feature of AngularJS is that all its features can be modified or replaced to fulfill the organization’s developmental needs.

Get ahead in your career by learning AngularJS through Mindmajix AngularJS Training.

AngularJS has developed seven years ago in the year 2009 by Misko Hevery. It has undergone some major changes since its invention from version 1.0 to enhance every part of AngularJS. After version 1.3, the developers had announced that they were focusing mainly on version 2.0.

But the current stable release of AngularJS was done in January 2018 which was version 1.6.9 which added many concepts of Angular AngularJS, including the concept of component-based application architecture. Version 1.7 is scheduled to be out on June 30, 2018.

There is a wide range of JavaScript-based open-source web application frameworks available but what makes AngularJS stand out from all of those frameworks are its unique features that are beneficial for a web designer or a user experience designer. Some of such advantages of AngularJS are:

Two-way data binding: One of the most notable features of AngularJS is two-way data binding between the selected element and the OrderProp model. It largely relieves the server of the templating responsibilities.

In AngularJS, data is referenced using $scope objects. The concept of ‘$scope’ is very crucial in AngularJS as it detects changes to the model and modifies the HTML expression.  The two-way data-binding and the nature of scope objects have led to the controller being referenced as a view-model. This is the pivotal reason for AngularJS to be popular as MVVM.

Dependency Injection: Dependency Injection is another important feature of AngularJS. It is basically nothing but a design pattern that implements inversion of control for handling dependencies. Using dependency injection, Angular brings traditionally server-side services which resultantly reduce the burden on the server.

The prominent usage of dependency injections comes in the field of testing and SPA (Single Page Applications). In the case of testing, AngularJS allows the user to split the app into smaller modules that can have dependencies and lets the user import only the modules that he/she is interested in.

Allows expressing UI and reducing side effects: There are numerous benefits for declarative User interfaces. The extensions in AngularJS to HTML are done with the help of ng-directives. Some of the directives are ng-bind, ng-controller, ng-class, etc. By declaring the user interface, the chances for having side effects (An unexpected change that causes ruinous results) are reduced.

Provide Developers controls: In AngularJS, the user can easily split the functions into the MVC (Model View Controller) way. One of the most commonly heard complaints about MVC is that the various controls that it uses to make it a bit complicated. AngularJS enables a feature namely ‘directive’ that helps in creating new HTML elements and attributes. For example,  ng-class is a directive that is used to conditionally apply a class. 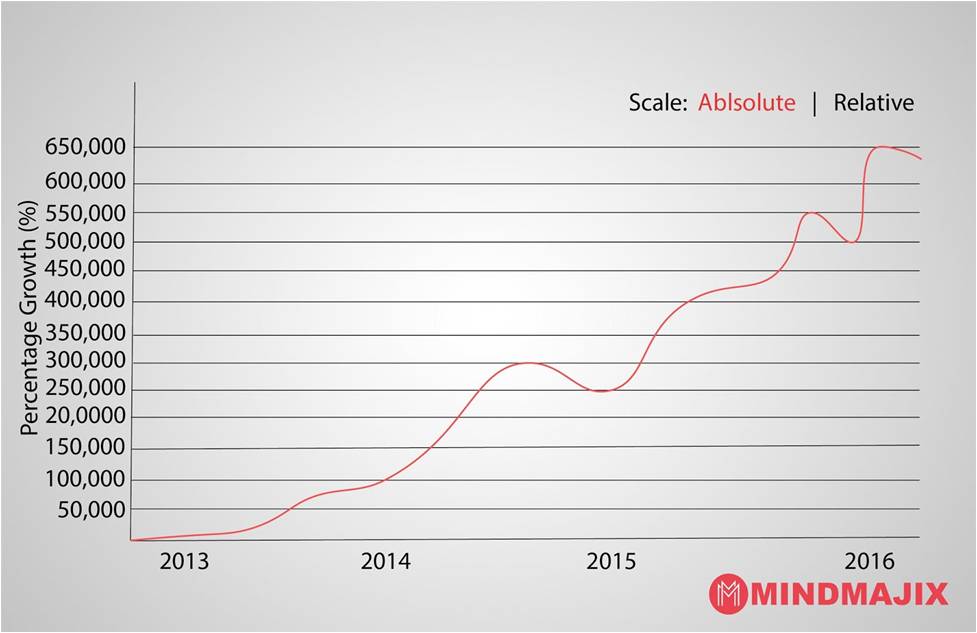 This graph is a clear indication of how successful the growth of AngularJS has been over these years. This level of popularity shows that it has not just gained the interest of an individual developer, but a wide range of audiences. The audience looks up to the AngularJS community with greater expectations and this was proven beyond doubt when the first batch of tickets of the second annual conference of AngularJS was sold out within a matter of two minutes.

The popularity of AngularJS provides a clear picture of how much the IT developers are in need of skilled professionals in AngularJS. As discussed earlier, in spite of having various other JavaScript frameworks in the industry like ReactJS, EmberJS, etc AngularJS has managed to achieve the top position in the field of web development.

With the dawn of AngularJS, there has been a complete change in the scenario as AngularJS subjugated the arena of the JavaScript network because of its effective features and functions. The integration feature of AngularJS is considered as the most notable reason for its continuing success thereby making it a popular choice.

While gaining popularity among Web developers around the globe, the job opportunities in the field of this JavaScript framework is also taking a huge leap. The developers are hunting for talented people who can fulfill their requirements.

The payment for the ones working for this field is also in figures that are good enough to attract the professionals. The percentage of hiring for web developers has shot up considerably over the past few years.

Over these years, AngularJS has proved to be a platform that is worth the time of a web developer and a perfect benefit for the professionals who are skilled in AngularJS to showcase their talent. In case you are looking for courses related to web development, it’s high time that you pick the trend of AngularJS.