AngularJS is one of the most popular Javascript frameworks that is being used at present in the field of web development. It is a front-end Javascript framework which is used for creating web applications. Although the AngularJS project was started by Google, now it is an open source framework.

Get ahead in your career by learning AngularJS through Mindmajix AngularJS Training.

This framework has gained immense appreciation from the web developers around the globe because of its exclusive ability in creating Single Page Applications and various other features. Even after 7 years since its release, AngularJS still manages to be the most prominently used Javascript framework in the field of web development.

It is a very common fact that any programming platform or framework will have some myths regarding them. If you are looking towards studying and getting a certification in AngularJS or a professional who is planning for a shift in their career platform, certain facts regarding the myths revolving around AngularJS should be cleared at first. So we are here to enlighten you regarding those misconceptions.

1. There is a major decline in the use of AngularJS:

One of the most common misconceptions regarding AngularJS is that the market for AngularJS developers has come down. There were some reports that came out in and around 2016 saying that the newer versions of Angular are much better than AngularJS. 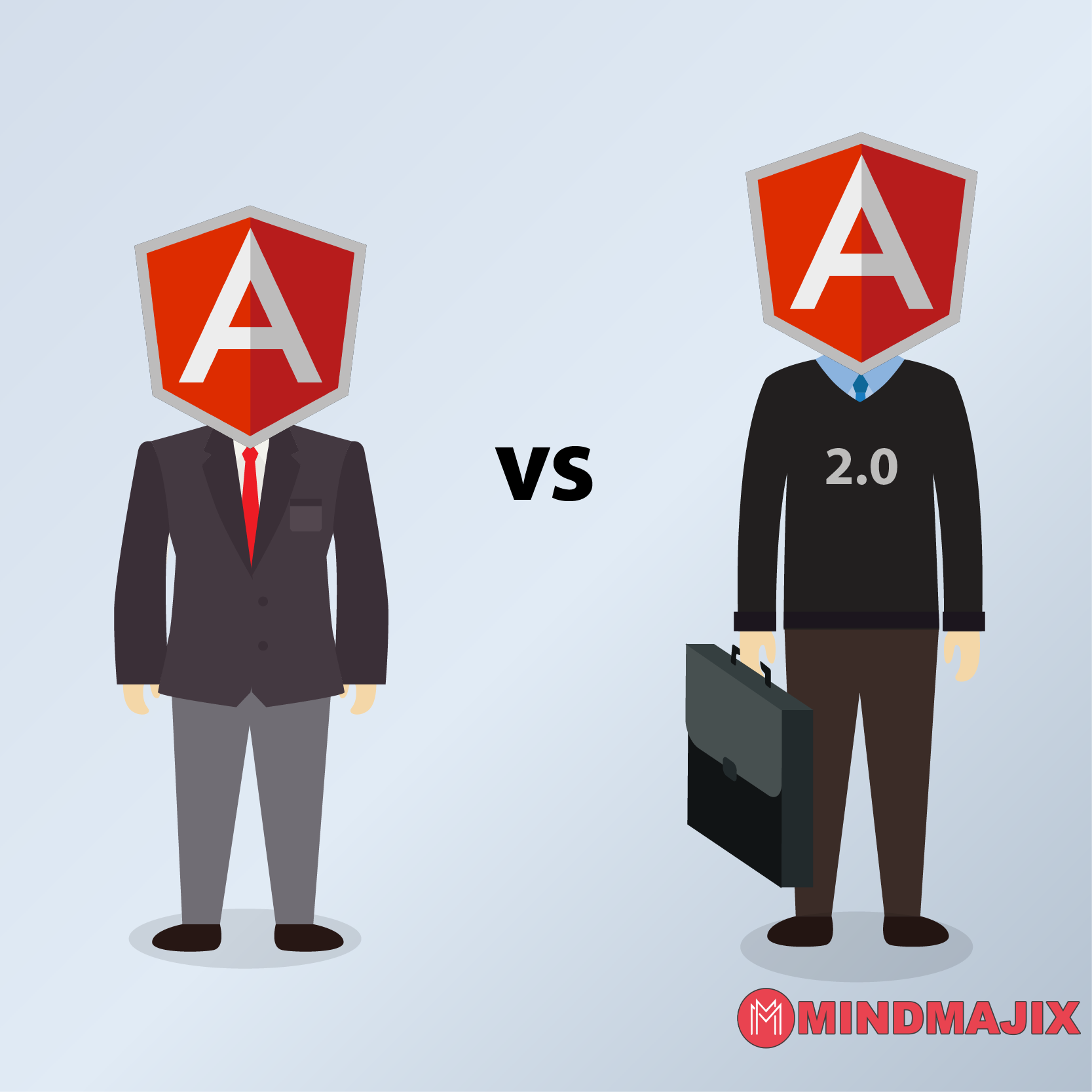 AngularJS is basically the first version of Angular which is known for its ability of two-way data binding and has directives which makes the code reusable. Its dependency injection mechanism contributed significantly to the front-end application testing. The newer versions of Angular were developed with a motto to improve the performance but while aiming at the better performance and trying to reduce the use of directives in the newer versions, the developers ended up making it all the more complicated.

To sum up, if the newer versions of Angular were as good as the developers had promised, 1.3 million developers would not be still sticking onto using AngularJS.

2.  AngularJS is huge in size:

The main points that people quote while praising other frameworks is their compactness (especially Backbone JS and JQuery). Let’s have a quick look at some stats.

Approximations for minified and Gzipped versions :

Now that you have got a clear picture of the sizes of these frameworks, let’s have a small discussion over this topic. Let us disclose a secret to those people who complain about the bigger size of AngularJS. AngularJS is a framework that will on its own. You don’t have to necessarily add any server-side language for it to work. It is completely up to you to add it or not.

Whereas other frameworks, for example, Backbone JS has much stronger dependency on JQuery comparatively. So keeping aside the minimized size of the Backbone JS, when in use the size will be more as it largely dependent on JQuery.

So when in comparison (while in use), AngularJS’ size is not as huge as it is being portrayed.

3. AngularJS can be used only for building simple web applications:

This is another common myth that exists regarding AngularJS. Since it offers a feature that reduces the burden of buggy coding, it is often misinterpreted that it can be useful only in creating smaller web applications.

Advanced techniques of AngularJS have been used in creating bigger websites like The Guardian, Paypal, etc.

These websites are a proof that AngularJS framework can be effectively used to create complex websites in the field of e-commerce, entertainment, business, etc.

These large websites are a proof that less coding doesn’t always mean that those frameworks are designed for creating small applications. It is not true that they will not scale or won’t reach up to the mark that the enterprises expect. Even less code frameworks are capable of creating large-scale websites.

4. AngularJS does not work well with nested objects:

This is the most baseless myth that revolves around AngularJS. It actually is that framework that is most compatible while working with nested loops.

And it just works.

When multiple tabs are open on your laptop or desktop, as a reflex your system slows down. A similar scenario happens with AngularJS. Let me give you an example.

So let’s have a look at this code which is a nested ng-repeat with two bindings. Now, let’s imagine that there are 100 users and 10 skills. The command getTitle takes 1 millisecond to run. To do the initial render, this code takes 3 seconds. So an outsider so watches this will criticize that AngularJS is slow.

But this scenario occurs because AngularJS will often have to run the digest cycle multiple times in order to account for two way data binding. Here the problem lies in the command  getTitle, so you can either optimise that function or pre-compute all the titles and just bind to primitives.

So basically the problem does not lie with AngularJS but with the inefficient expressions that are being used in the code.

6. AngularJS is difficult to learn:

Anyone in the field of coding would have started off their career by learning HTML and plain Javascript. But once you start writing directives in a custom code, it gets complex. 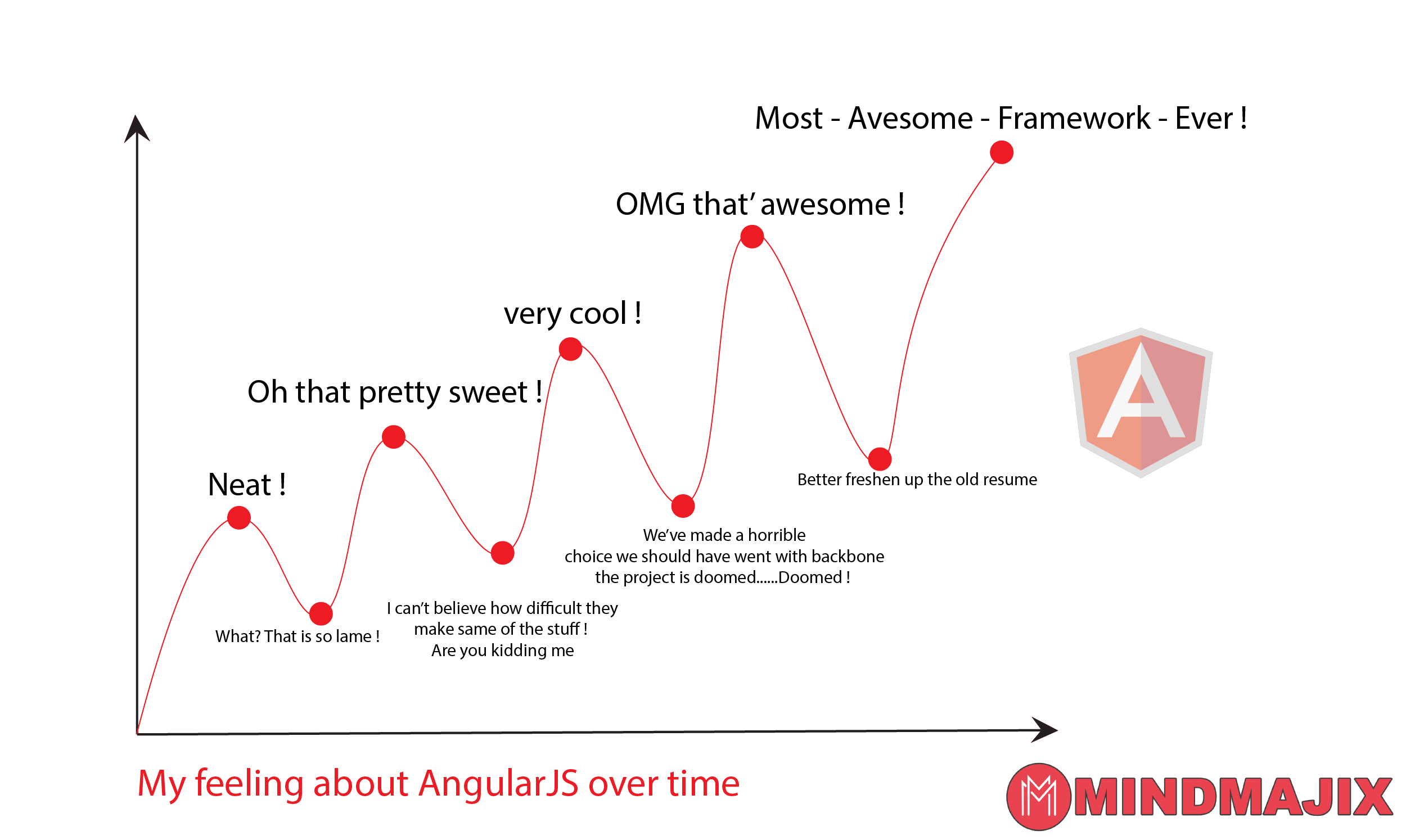 You must have at least heard of Jeff Goodman who created one of the world’s most popular site for sharing codes, Plunker. But did you know this guy without any former technical training made this website with the help of AngularJS? Yes, you read it right. He had run into many problems while building the website but whenever such a problem arose Angular community came forward to support.

There are a wide range of content that has been produced to help you pass the learning curves like github repositories, egghead.io, etc.

7. AngularJS is not secure:

This is another myth that revolves around AngularJS. The first concern that any enterprise would have will be regarding the security. This is because they have to ensure that the new frameworks that they are using does not create any holes in their security mechanisms.  The security concern is not very severe with AngularJS as you don’t have to include any extra security practises than what you have been following so far in your organisation like the basic guard against injection attacks, secure sessions on the server, etc.

With the birth of any technology, there will be some myths that would come up regarding them. AngularJs had its share and we have demystified some of the most common myths regarding this Javascript framework. So, AngularJS indeed is the ‘superheroic Javascript network’ which still remains as the most prominently used framework in the web development sector.