Are you looking for the best resources to help you master OpenCV interviews? Well then! you're on the right page. This blog is designed for candidates who are interested in working with the OpenCV platform. Our team compiled the best OpenCV interview questions and answers for freshers and experienced candidates, which will assist you in landing your dream job.

OpenCV is a BCD licensed open-source computer vision module that analyzes and processes all videos and pictures. Many computer vision algorithms are included in this open-source library. By analyzing photos and videos, it is capable of recognizing handwriting, objects, and faces.

Those who are interested in artificial intelligence and Machine Learning may want to consider a career in computer vision. It's a new field with less competition, but it promises a bright future. Companies such as Google Cloud platform, Volvo, BMW, Tesla, Amazon Cloud, and a slew of other AI tech industry giants that are developing self-driving cars and algorithms based on AI require knowledgeable people. Here are the top OpenCV interview questions and answers that can help you develop a better understanding of the OpenCV concepts while also making a positive impression on your interviews.

Our team categorized the OpenCV Interview Questions and Answers as follows:

1. What is meant by OpenCV?

OpenCV is an open-source computer vision, image processing, and machine learning toolkit. OpenCV supports Python, C++, Java, and other application programming interfaces. It can analyze photos and movies to recognise items, even human word recognition and face recognition. When it's combined with other packages, like Numpy, a highly optimised package for mathematical operations, the number of items in your inventory grows, as any operation that Numpy can do may be merged with OpenCV.

2. What is meant by Computer Vision?

Computer vision is a process that discusses how to rebuild, analyze, and interpret a three-dimensional image from its two-dimensional images to define the scope inherent in the scene. It is concerned with employing computer hardware and software to model and replicate human vision.

Computer Vision has a lot of overlap with the following fields:

3. Tell us the advantages of OpenCV?

Following are the advantages of OpenCV:

4. What are the limitations of OpenCV?

Following are the limitations of OpenCV:

5. What are the features of OpenCV?

Following are the essential features of OpenCV: 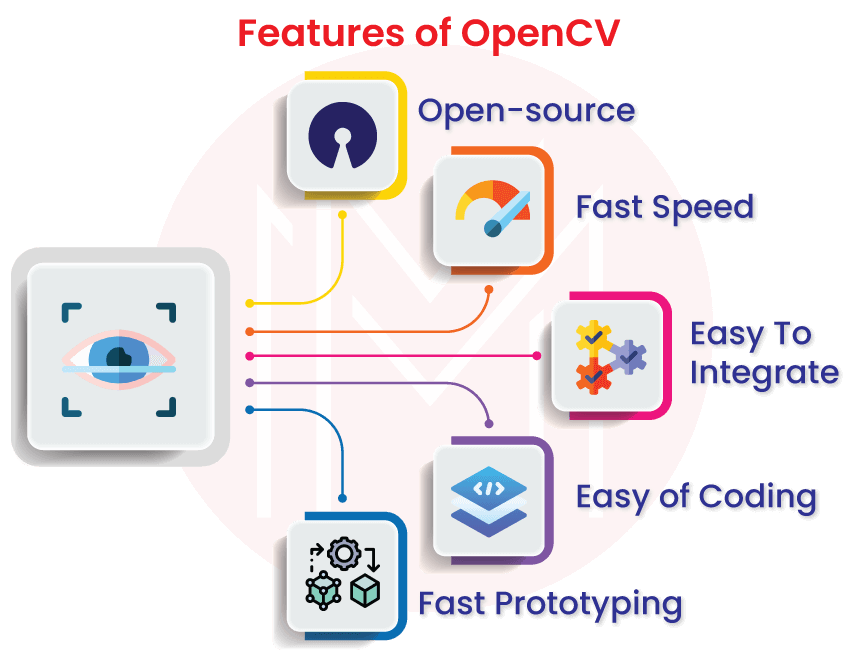 6. What are the OpenCV Library modules?

Here in this blog we are going to discuss a few essential OpenCV libraries/packages.

7. What are the applications of Computer Vision?

Following are the few applications of Computer Vision: 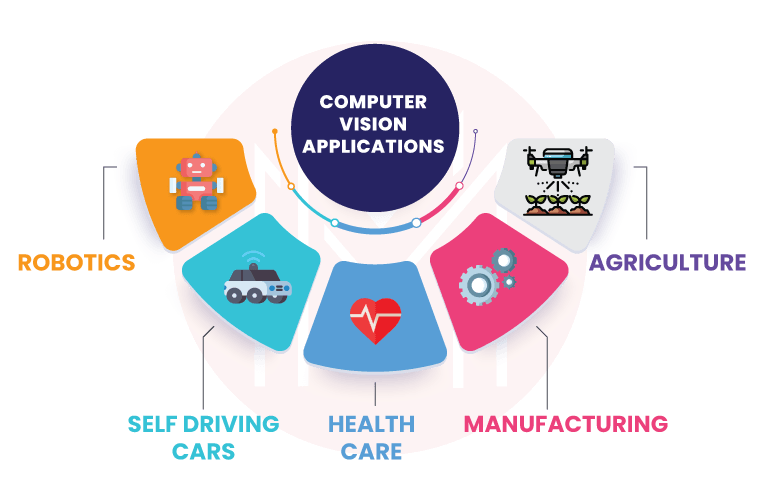 8. What are the applications of OpenCV with Python?

With the aid of OpenCV in Python, you can simply process photos and videos and extract relevant information from them, thanks to the numerous functions provided. The following are some examples of common applications:

9. What is Dynamic Range?

A quantity's dynamic range is the ratio of tiny and big values it assumes. Signals, light, sound, and photography all employ it. From a photographic standpoint, it is a ratio of the specified range of light intensity or the lightest and darkest parts, also known as color contrast.

A digital image is made up of the picture's constituents, which are also known as pixels. Each pixel has finite and discrete numerical representations that correspond to its intensity and grey level, which are outputs from two-dimensional functions fed by spatial coordinates designated by the y-axis and x-axis.

1. How many types of image filters in OpenCV?

Filters typically employ multiple pixels to compute each new pixel value, whereas point operations can conduct image processing with just one pixel. The filters can be used to smooth out hazy or fuzzy images of local intensity. The concept is to replace each pixel with the average of its neighbours. Filters are classified into two types:

Kernel matrix and convolution of matrix pixels to reduce the image intensity, resulting in blurring. There are three types of linear filters as follows:

The boxfilter() function can be used to perform this filter. It works in the same way as the typical blur operation. The function's syntax is as follows:

The imgproc class's Gaussianblur() method can be used to execute this operation on a picture. This method's syntax is as follows:

OpenCV contains a function named "Laplacian" that calculates the pixel integration to generate the kernel matrix to compute the Laplace filter.

The number "24" stands for "DDepth," which represents the depth of the destination image. The Laplace filter produced this result.

Using a nonlinear function to calculate the value of the source pixel. The goal is to use some sort of sequencing method or function to substitute the target pixel's value with that of its neighbors.

There are many other types of non-linear filters, but we're discussing three in this blog.

2. Explain about Sampling and Quantization?

To transform analogue images into digital ones, we use sampling and quantization. There are two aspects to an image.

3. How to store the images in OpenCV?

We employ equipment like scanners and cameras to capture images. These gadgets keep track of the image's numerical values (Ex: pixel values). We need to store these photos for processing because OpenCV is a library that processes digital images.

The picture values are stored in the Mat class of the OpenCV library. It is used to hold image data such as voxel volumes, point clouds, histograms, grayscale or color images, vector fields,  tensors,  and other n-dimensional arrays. The header and an indicator are the two data elements of this class.

4. What are the constructions of Mat class?

This class (Mat) is provided by the OpenCV Java environment within the package.

1. How to create and display the Matrix in OpenCV?

Below steps are followed to create and display the Matrix in OpenCV:

Use any of the functions given earlier in this article to instantiate the Mat class.

By supplying index values to the functions row()/col(), you can obtain specific rows/columns of a matrix ().

You can use any of the setTo() functions to set values to these variables.

2. How to read the images in OpenCV?

Methods for reading and writing images are found in the Imgcodecs class. OpenCV allows you to read a picture and store it in a matrix (along with any necessary transformations). You can save the processed matrix to a file later.

To read a picture using OpenCV, utilize the read() function of the Imgcodecs class. This method's syntax is as follows.

It takes a single argument (filename), which is a String variable that represents the path to the file to be read.

3. How to write the images in OpenCV?

This method's syntax is as follows:

4. How to convert Mat to Bufferedimage in OpenCV?

The function imread is used to read an image (). This method returns a matrix representation of the picture read. However, to use this picture with GUI frameworks (JavaFX and AWT/Swings ), it must be turned into an item of the class BufferedImage from the java. awt. image package. BufferedImage

The following are the steps to convert an OpenCV Mat object to a BufferedImage object.

Step-1: Encode the Mat to MatOfByte

To begin, you must transform the matrix into a byte matrix. You can achieve it with the imencode() function of the Imgcodecs class. This method's syntax is as follows.

The following arguments are accepted by this method:

Step-2: The MatOfByte object is converted to a byte array

Transform the MatOfByte item into a byte array using the toArray function.

Step-3: Getting the InputStream object ready

To create the InputStream object, pass the byte array created in the preceding phases to the constructor of the ByteArrayInputStream class.

Step-4: Getting the BufferedImage object ready

The read() function of the ImageIO class accepts the Input Stream object produced in the preceding step. A BufferedImage object will be returned.

5. How to display the image using JavaFx?

To use JavaFX to display a picture, first read it with the imread () function and convert it to a BufferedImage. Then, as seen below, transform the BufferedImage to WritableImage.

Transmit this WritableImage item to the ImageView class's constructor.

6. How to display the image using AWT/Swing?

To use the AWT/Swings frame to display an image, first read/import an image with the imread () function and then convert it to BufferedImage using the procedures above.

Then, as shown below, initialize the JFrame class and add the buffered picture to the JFrame's content pane.

7. Explain about morphological operations in OpenCV?

Morphological operations, as the name suggests, are a set of actions that manipulate images based on their shapes.

A "structural element" is created based on the provided image. This might be accomplished using either of the two methods. These are used to reduce noise and smooth out defects in order to make the image more clear. The two forms of morphological procedures are erosion and dilation.

8. Explain about Dilation in OpenCV?

Convolution with a kernel of a specified shape, such as a square or a circle, is used in this technique. The center of this kernel is indicated by an anchor point.

This kernel is overlapped across the image to compute the maximum pixel value. The image is replaced with an anchor in the center after it has been calculated. The areas of bright regions grow in size as a result of this procedure, and the image size grows as a result.

The size of an item in a white or bright shade, for example, increases, whereas the size of an object in a black or dark shade diminishes.

The dilate() function of the imgproc class can be used to dilate an image. This method's syntax is as follows.

9. Explain about Erosion in OpenCV?

Dilation and erosion are both related processes. However, in dilation, the pixel value obtained here is minimum instead of maximum. The picture gets replaced with that pixel value under the anchor point.

Dark regions expand and light regions shrink as a result of this operation. For example, an object's size increases in a dark or black shade but diminishes in a white or brilliant shade.

The getStructuringElement() function can be used to create the kernel matrix. This method takes an object of type Size and an integer indicating the morph rect type.

10. Explain about the sobel() method in OpenCV?

Users may detect the edges of a picture in both vertical and lateral dimensions with the sobel technique. The method sobel can be used to apply the sobel operation to an image (). This method's syntax is as follows:

11. Explain about the Scharr() method in OpenCV?

Scharr is also used to find a picture's horizontal and vertical second derivatives. The Scharr method can be used to conduct the Scharr operation on a picture. This method's syntax is as follows:

Here our blog ends and It makes no difference how much knowledge you gather to study a concept; what matters is how clear and precise you make it. In this blog, we've endeavored to compress basic to advanced concepts of OpenCV Interview questions and answers. I hope that these questions and answers have given you a better understanding of concepts. Please let us know if you come across any similar questions that aren't answered here in the comments section.