Python is everywhere, it seems to be like that it is powering everything. You just name it and it is there, it is on major websites, desktop utilities (famous example is BitTorrent Client) or even enterprise softwares. It is one of the few languages available for the beginners to get started with and for the intermediate programmers to turn pro within no time. Having said that, editing Python programs has been traditionally done using IDLE (the readymade Python editor that comes along with the Python package) or Emacs.

If you want enrich your career and become a professional in python, then visit Mindmajix - a global online training platform : "python training"   This course will help you to achieve excellence in this domain

However, if you are looking at catching the pace in becoming a pro in Python programming language then the first step to take is to use an IDE (Integrated Development Environment) that provides you with features, which help you with your quick coding process. Cherry pick the best IDE from the list that we provide here to help yourself automate a load of tasks that you usually do it manually and at the same time ease up the project management.

For the first few days or weeks, you might have to end up using a lot of IDEs to match your requirements, your interests and the available features. The list below will allow you to cut down hundreds of options available to just 10 to choose from, so why wait? Let’s get down to business, shall we? 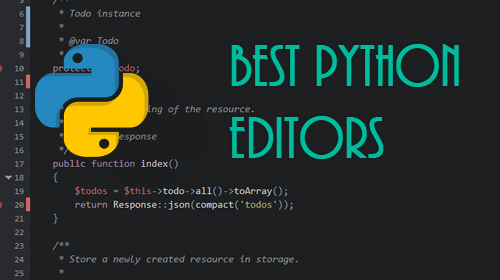 There can be n number of factors that you might want to consider before choosing the best IDE for Python programming, but ideally the most important ones that we have considered for this article are as follows:

This is a plugin available for usage on the standard Eclipse IDE for any programming language. Most of the developers choose to opt this, considering the ease of use and also the ease of installing the plugin too. Apart from this, there are few other points that we might want to consider, which are as follows:

PyCharm is just shy away from PyDev plugin with only one difference that it is a fully paid for all featured version. It is considered equivalent to PyDev as mentioned earlier and it is the best IDE for Python developers. Apart from this, let us take a look at the other features of this IDE as well:

Wing IDE is one of the oldest and mature IDEs available for Python programming languages, also with that it supports the latest versions of Python that includes stackless Python. Wing IDE comes in 3 versions – one the free version, second a personal version and third the most powerful professional version which is obviously the paid version. Now, let us take a peek at the other salient features of this IDE:

This is a cross-platform IDE that supports multiple programming languages alongside Python. This is a commercial product but provides a free of cost version in the name of Komodo Edit. Now, let us see the other salient features of this IDE:

Eric is interestingly another open source Python IDE that has been purely written in Python along with its basis on Qt GUI toolkit. Over the past few years, Eric has evolved into a most used and feature rich IDE. Let us take a look at its other salient features:

This is yet another open source IDE best suited for Scientific Python development. This is a lightweight software written in Python itself and is available under MIT license for usage. Some of its salient features are as follows:

This is another open source IDE available for Windows environment alone. Some other salient features of this IDE are as follows:

Geany is another cross-platform IDE for Python programming that is available under GPL license for usage. Some of its salient features are as follows:

VIM is another bare bone Python IDE or one of the most advanced text editors that is common amongst the Python developers. VIM is just a text editor but it is nothing less than a full featured IDE, if it is correctly configured for Python programming. Some of its salient features are:

IDLE is an IDE that comes along with the Python package itself. This can prove quite helpful if you just want to experiment your very first Python scripts but falls flat if you are willing to develop semi-medium to complex applications in this. It was never designed for that.

Python has been and is an old programming language that has survived the tide, lately has seen fast changes in the overall programming landscape. With the current changes that Python is been seen with, the IDEs have changed a lot. This article has been written to introduce you with the IDEs that serve two purposes – faster development and scalable / manageable code.

As a matter of fact, after going through all of these options – suggestions from us are to use PyDev plugin for Eclipse or Eric if you are willing to use an open source IDE and if you are looking for a commercial version then go for PyCharm.

Do you know any other IDE that is not listed here, please provide us your feedback through comments.