Python is a powerful programming language that has started regaining its fame for its usage in the Data Science along with the latest technologies like R and etc. Having said that, let us take a look at the tiny winy bits of concepts to get ourselves stronger in this programming language.

In this article, we will try to learn about the lists available in Python programming language. To provide you the gist of what lists can do, please take a look at the following section.

If you want enrich your career and become a professional in python, then visit Mindmajix - a global online training platform : "python  course"   This course will help you to achieve excellence in this domain

How do Lists Work in Python?

Lists is one out of the four very important constructs provided by Python programming language. The rest of the constructs available are tuples, dictionaries and sets. With lists, we achieve saving and storing an ordered collection of items which can generally be different but should not be so, for various purposes. The elements that are contained within a list are separated by commas and are made available inside of square brackets. A sample list in Python can be declared as follows:

Python saves lists as ordered collection of items or objects, we can safely term them as sequence types – as they behave just like a sequence. In simpler words, a sequence in the Python’s context is what we can iterate over. Hence lists, strings, tuples and sets are all called as “iterables”.

Now with that being discussed, let us see how we can access elements out of these lists that we have created earlier. We can access elements of a list by the index operator, considering the example above – there are 3 elements in it and the index ranges from 0 to 2. Hence, if we are referring to an index out of these then we will get an IndexError. A point to note here is that the index is always an integer and not a float or decimal, usage of such indexes would throw a TypeError.

Now let’s look at an example: 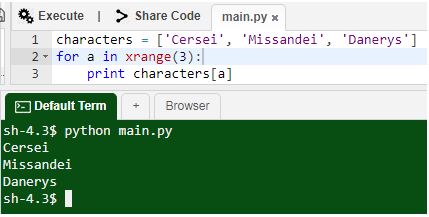 There is an interesting tip that we can learn here, which is about the Negative indexing provided by the Python programming language. Generally a negative index is interpreted as the nth element of the list from the end. If we were to apply this to our example above, this is how it is going to be: 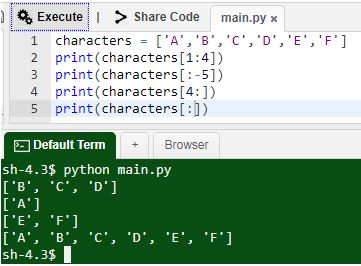 Closely observe each usage of the slicing operator “:”, to understand it better.

Observing the behavior in the last three exmaples, you might have understood the usage of the split operator. Hence when we have not given any indexes from the beginning or to the end, the fourth command has returned all the 6 elements of the list.

Learn more about Python Interview Questions in this blog post.

Now getting on to the next topic of adding or changing the elements of a list. Elements can be added or changed on a list, as a list is MUTABLE as against a string or as a tuple (both of these are IMMUTABLE, meaning, cannot be changed). Let us now look at an example to understand this even better. 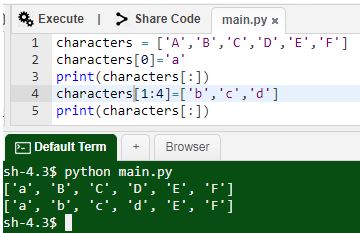 What have we observed on the first command? We have referred to the element with index 0 and assigned a new value of ‘a’ instead of ‘A’ to the list named characters and hence the output.

The execution of the next command is very similar to what we have seen in the first one, but the only difference is that we can modify the contents of the elements with indexes 1, 2 and 3 with newer values of ‘b’, ‘c’ and ‘d’ instead of ‘B’, ‘C’ and ‘D’. Once these are modified and when printed, you would see that the change is persisted to the list and hence the output of second command as well.

Now that we have understood how to update a list with newer values, let us take a look at how we can add new elements to our list. 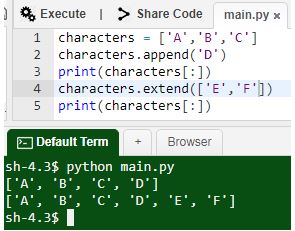 The append() function adds an element to the list provided with the new one.

The extend() function adds the number of elements provided as input to it to the existing list and hence the output of both the commands, adding elements to the list at the end of the list.

Now that we have understood updating and adding elements to a list, let us look at an example of removing or popping elements from a given list.

From the example below, remove(‘A’) removes the element from the list directly. The method pop(), if given an index then it will pop the element of the list as per the index provided and if there is no index value provided to this method, then it will pop the right most element of the list, hence the output of all the three commands based on the explanation given here. 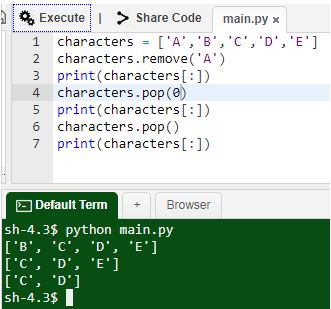 In this article, we have seen what lists are and why are they used in Python programming language. We have also tried to take a deeper look into the concept with various examples as well.

Hope that you were clear with the concepts after going through this detailed article, please do comment if you have any suggestions to make.

These courses are incorporated with live instructor-led training, industry use cases, and hands-on live projects. This training program will make you expert in Microsoft azure and help help you to achieve your dream job