R vs Python: Which is better R or Python?

Python and R are the most popular languages for data science and both are close competitors. As there is a surging demand for Python and R in the programming domain, we need to analyze and compare these languages to know hidden insights. Both the languages have their own importance but they differ in some instances like readability, performance and many more.

According to KDNuggets Data Science Survey Python has overtaken R in recent years because of its popularity. Both R and Python have come up with newly added libraries and tools to increase the performance.

If you want enrich your career and become a professional in python, then visit Mindmajix - a global online training platform : "Python Certification Training" . This course will help you to achieve excellence in this domain

Python has become the most sought-after skill in providing the general approach to data science while R is mainly used for statistical analysis.

Python and R are becoming brand-new terms in the context of programming. Having clear knowledge on each programming language is an ideal solution. But, the only reason is that we need to spend a lot of time, which is not possible for everyone. Learning Python is easy because it provides us with simple syntaxes along with high readability. R is designed and built by statisticians and it encloses everything

In this R vs Python blog, we are going to learn the following:

So, let us begin with the Introduction to R first, which I am going to talk about in the section below.

R is a programming environment and language that is mainly designed for statistical computing and graphics. It is an integrated suite of software facilities for graphical display, data manipulation, and calculations. R is highly extensible and provides you with a wide variety of graphical and statistical techniques. Basically, this programming language is a part of Data Science and is considered as one of the best and richest ecosystems to perform data analysis. The availability of rich libraries in R makes it the first choice for analytical work and statistical analysis.

One of the major strengths of R is that we can produce well designed publication-quality plots by using mathematical formulas and symbols. There also exists a Comprehensive R Archive Network (CRAN) which is the huge archived collection of R packages and by using this, the user can contribute easily. These packages are formed by the collection of all R functions and outputs. This is to get easy access immediately to the latest techniques and the functionalities without the need to develop everything from the beginning.

Python is a programming language that lets you work more quickly and integrate your systems more effectively. It is a highly readable and popular object-oriented language. Python has been an important part of Google and remains the same as the system evolves and grows. It is a tool used to implement and deploy machine learning strategies on a large scale.

A recent survey by Stack Overflow showed that Python is one of the most used languages when compared to C, C++, Java, and many others. So, this makes Python highly popular, and getting certified in Python will help you in earning huge salaries.

R vs Python: Comparison of R and Python

Let's see the Comparison Factors of R and Python

Now, when it comes to the popularity of languages, both Python and R are gaining more popularity these days.  When compared to R, Python has witnessed huge growth in the case of popularity.

The huge rise in demand for various technologies such as Big Data, Artificial Intelligence, and Machine Learning explains the increase in demand for Python developers. Both the languages play a major role in data analytics but Python has a steep growth than other languages due to its simplicity and flexibility. Moreover, it ranks higher on job trends.

R vs Python #2. Ease of Learning

Which language is easier R or Python?

R is difficult and we need to put a lot of effort to learn; it becomes a steep learning curve for beginners who are not having an idea about programming. Once we gain knowledge on this, it will become easier to learn.

Python emphasizes both productivity and code readability as the key features that make it one of the simplest programming languages. It is preferable due to its understandability and ease of learning.

R vs Python #3. Data Analysis by R and Python

R is a low-level programming language because of which you need to write longer codes for simple procedures. This is one of the reasons for the reduced speed.

Python is a high-level programming language, so it has become a better choice for building applications easily and quickly.

R vs Python #4. Graphics and Visualization

A visualized form of data can be easily understood when compared to raw facts and values. So, in order to present the raw values in visualized format, R has come up with various packages that provide advanced graphical capabilities.

Python consists of some amazing libraries to visualize the raw data so that it can provide an effective way for the users to understand the facts and figures. The only reason is that is has a huge number of libraries but it provides tidy outputs.

In Python vs R fight, a number of loyal users are switching to Python when compared to R. 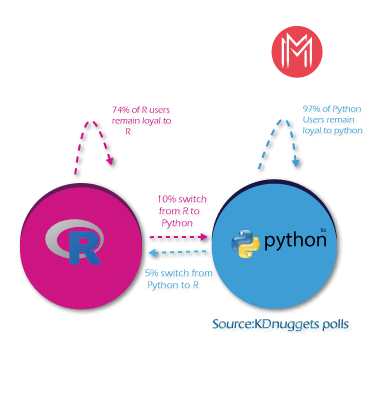 R provides an easy way of using complex formulas for users and it also provides statistical models and tests readily available for the users to use.

When it comes to any situation like building applications or websites, Python will be the best choice because it is considered as the most flexible and popular language in the programming domain.

Python having the best-suited capabilities required to integrate well with Hadoop and enables to design various machine learning algorithms.

R has recently added support for kerasR and keras packages. In R act as an interface to the original Python package and Keras.

Python has had great advancements in the Deep learning field with his its numerous packages like Tensorflow and Keras.

R is highly famous across startups and middle-level organizations and MNCs. Which shows a better opportunity.

Python is also highly famous across startups and middle-level organizations and MNCs. Which shows a better opportunity.

Python or R does not have customer service support but having many online communities. So, in R if you have any problem you will solve on your own or you take the help of online community people.

Let's see the Comparison of Additional Parameters in R and Python

R vs Python: Difference between R and Python

Python is suitable for communication and econometrics. Furthermore, Python is considered as the best tool for deployment and Machine Learning integration but it is not suitable for business analytics.

R is designed to answer various aspects in fields such as data science, statistics, and machine learning. R is the perfect tool for data science because of its excellent communication libraries. Besides, R is equipped with many packages to perform data mining, time series analysis, and panel data. On top of that, there are no better tools compared to R.

Now with this, we have come to the end of the comparison between R and Python. Both the languages give one to one fight in the world of data analytics and data science. But Python is the winner out of these two languages because of its enormous popularity and simplicity in coding.

Ans: Python is faster when compared to R because of its nature and it is also a general-purpose programming language in which users can code easily and effectively. R is a language that is mainly designed for data analysis and it also becomes difficult for the users to understand and code in this language.

2Q. Is R or Python better for machine learning?

Ans: Both languages are having their own importance in the IT sector. But, when it comes to machine learning most of them use Python as their priority because of its high readability and flexibility.  Another reason for choosing Python is that it has an easy to code feature. Most of the communication tools like IPython are becoming very attractive and are one step ahead than their peers. R can also be used for Machine Learning but it takes a lot of time to code when compared to Python.

3Q. Which is best for data science R or Python?

Ans: R and Python, both are considered as the state of the art languages in terms of programming that are oriented towards data science. R is mostly used for statistical analysis whereas Python provides a general approach to data science. Both languages have their own pros and cons. So, based on that, we need to select the language for data science projects.

4Q. Is it worth learning Python?

Ans: It will always be worthful and profitable for an individual by learning any programming language. But, nowadays, Python is becoming a more popular language in the programming domain. So, if you learn Python, it will be very useful and you can get placed in top MNCs because of most of the companies code in it.

5Q. What is the main use of Python?

Ans: Python is mainly used for building various applications such as web applications, software development applications, and many more. Python is becoming the most-used language in the programming domain because of its features such as easy-to-learn and productivity.

Pranaya is working as a Content Writer at Mindmajix. She is a technology enthusiast and loves to write about various technologies which include, Java, MongoDB, Automation Anywhere, SQL, Artificial Intelligence, and Big Data. You can connect with her via LinkedIn and Twitter.