Geocode in Tableau - Table of Contents

If you had to go through the trouble to add customized geographic coordinates, wouldn’t it be better to make it available to other people within your organization? This is done by importing the address coordinates directly into Tableau Desktop. After they are imported, the custom locations behave like Tableau’s default geographic units. The import file should have the following characteristics:

It’s best not to include a lot of additional dimensional data in these important files. Be sure that you have only one instance of Tableau open when you perform the import. If you want to share this custom data with other people building reports in Tableau, store the list in a shared network directory so that other users can import from the same list as well. Figure 5.11 is an example of a custom geocode table properly formatted for import. 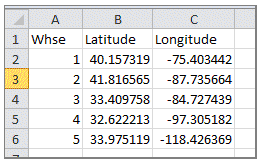 After saving the custom list in comma-delimited CSV format, the custom geographic data can be imported into Tableau. Initiate the import using the main menu (map/ geocoding/ import custom geocoding). A small file will only require a few seconds to load. Large lists can take up to several minutes. Running the import will create a new data file on your computer within (My Tableau Repository/ Local Data). The custom data is stored as a Tableau data source file (TDS) with the same name as the source CSV file which was imported earlier.

Once you have created a .csv file with custom geocoding you can import that file into Tableau. Follow the steps below to import a new geographic role.

The custom geocoding data is imported into the workbook and the new geographic roles become available. To assign a new geographic role to a field, right-click the field in the Data pane, select Geographic Role, and then select the role you want to assign it.

After importing custom geocodes into Tableau Desktop you can use them with other data files to build maps as long as those files contain the same location key record defined in your data import table. The custom data file used in the rest of this example looks like the one in figure 5.12.

Notice that there is no longitude or latitude data in the table shown in Figure 5.12. However, the (Whse) field can be used to link the imported data from the custom geocode table displayed in Figure 5.11. The steps to use custom geocoding in this example are:

Altering the geographic role of the warehouse location is done by right-clicking on the Whse field, and selecting Geographic Role/ Whse as you see in Figure 5.13 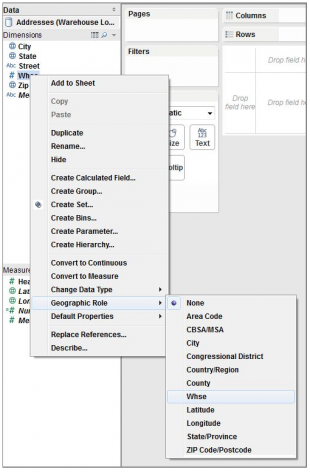 The whole field icon will change to an icon that is similar to a standard geographic icon, but with a small list in front of the globe. Tableau will now recognize the imported geographic data. Figure 5.14 shows a map plot of the custom geocoded warehouse locations.

Notice that the column and row shelves are using tableau’s (generated) latitude and longitude fields. However, the warehouse marks actually use imported custom locations to place the marks. Hovering over the Los Angeles location causes a customized tooltip to appear, showing particulars about the warehouse zooming in on the Los Angeles location. In figure 5.15, you can see that the mark is more precisely placed than the tableau’s standard geocoding can provide. This detail comes from the imported geocodes you saw in figure 5.12.

[ Related Page - Plotting Your Own Locations on a Map in Tableau ]

The order of the steps for enabling custom geocodes, at the beginning of this section isn’t the only way to achieve the result. You can import the custom geocoding at any point-even after a map plot is done using standard geographic plotting.

Now that you’ve learned how to precisely plot any location on a map with custom geocoding, in the next section you’ll learn how to replace tableau.

Tableau maps visualization is special scatter plots that use map images for backgrounds and special measures (longitude and latitude) to plot marks on the map. This implies that you can replace Tableau’s standard map images with other image files.