How to deploy tableau server in high availability environments?

As tableau server usage increases, the requirement to ensure its continuous availability also rises. Strategies to assure constant availability is predominantly referred to as high availability. These strategies necessitate that the core component of the tableau server must be redundant to reduce the chance of unplanned downtime. Realizing this goal requires deployment in a distributed environment and running unnecessary critical processes on separate servers.

If you’re configuring a Tableau Server system for high availability, the steps you perform are all designed to build in redundancy, thus reducing your potential downtime. The four areas that require redundancy are the data engine, repository, and gateway processes, and the primary Tableau Server, which runs the server licensing component. Because there must always be one active in the repository process, configuring the cluster is a multi-phased procedure that requires the primary Tableau Server to be stopped and restarted at certain points so that settings can take effect.

Achieving significant redundancy can be perceived by using a three-server cluster, but to achieve a fully redundant configuration, at least four servers are necessary.

These core tutorials will help you to learn the fundamentals of Tableau. For practical experience explore "Tableau online training."

In this configuration, one node hosts the gateway, which paths requests to the other two worker servers. Both worker servers run all of the server processes. Though all of the tableau server’s processes should be redundant, the three definite processes that must be made redundant are the gateway, the data engine processes, and the repository process. Prior to tableau server version 8, both workers have instances of the repository and data engine processes, but only one of the two workers was actively accepting requests.

Now, both data engine processes actively accept requests, even though only one is considered as primary. In prior releases, the second worker has standby copies of the processes and is automatically promoted to achieve status if the main worker fails. This promotion is called fail-over.

A three-node system helps you reduce the primary’s vulnerability: 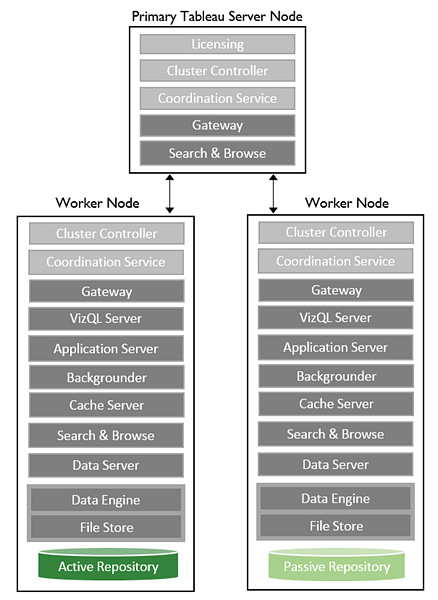 This configuration would look like the following Process Status table on the Server Status page. 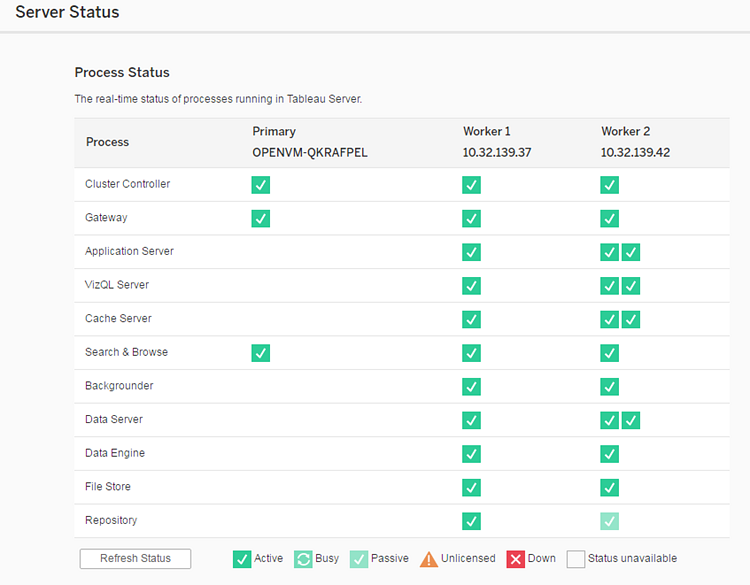 In a three-node cluster, the Data Engine and Repository processes have been moved from the primary to a worker, and the primary is only running the Gateway and Search & Browse processes. In this configuration, if your active worker fails, the passive worker automatically becomes active.

There are still two things you can do to improve these three-node clusters:

1) Add a load balancer to interface with the three active gateways.

2) Create a backup to address the single point of failure: the primary.

The loss of a worker machine can occur without even making the cluster inaccessible. However, since there is only a single gateway machine, if that server goes offline, the cluster will be inaccessible to the users. To have complete fault tolerance, a four-node cluster is required.

In a four-node cluster, a second gateway machine is added to make that critical node redundant. However, this standby gateway server must be promoted to active status manually. There is currently no automatic fail-over for gateway machines.

The three-node configuration presented earlier may be augmented with a redundant gateway server to increase reliability. For information about making the gateway redundant and the manual fail-over process see the “Configuring a highly available gateway” section of the tableau server administrator’s guide.