Quality metrics in a hospital in tableau

Healthcare data has the potential to reduce costs, enhance quality, and improve the patient experience. The challenge is how to get insight from information to action. Tableau empowers everyone to find the right path forward. It lets decision-makers visualize across costs, needs, and outcomes at once to make the most of the resources. It helps hospitals identify the impact of evidence-based medicine, wellness programs, and patient engagement. It can even enable patients to choose the right care through interactive visualizations of treatment cost and quality.

To gain in-depth knowledge and be on par with practical experience, then explore Tableau Training Course.

Quality metrics in a hospital

Jonathan Drummey is a data analyst in the quality management department at Southern Maine Medical  Center. Jonathan was recognized as one of the first-class Tableau Zen Masters for his active contributions to the tableau user community. Check out his blog, at
Drawing with Numbers

This story is about how tableau is used to monitor metrics, save money, and identify previously hidden cost savings. During the early part of the last decade, a series of bills were passed under the bush administration that directed the Centers for Medicare and Medicaid services (CMS) to be able for paying hospitals for reporting on quality measures. You can view the results online at hospital compare.

The affordable care act of 2010 (also known as Obamacare) extended those reforms and authorized Medicare for being able to pay hospitals based on the delivery of quality care and patient experience in a program called Value Based Purchasing (VBP). This might not seem that radical, but it is the first time in the history of the Medicare program that hospitals are being paid for the quality of care, not just for the volume of care. Donald Berwick, former director of CMS, said, “instead of payment which asks, ‘how much did you do?’ this affordable care act clearly moves us towards the payment that asks, ‘how well did you do?’ and more importantly, ‘how well did the patient do?’’’

In financial year 2013 Medicare withheld one percent of all Diagnosis Related Group (DRG) payments- the standard payments for treatments at hospitals- for almost every hospital in the United States. Based on performance on a set of measures, each hospital could lose that revenue or gain up to one percent or more.

In the Value Based Purchasing (VBP), the program increases the amount of risk by one quarter percent each year, up to two percent for fiscal year 2017. One percent might seem negligible, but for a non-profit hospital with 60 percent or more of revenue dependent  on Medicare (and less than one-half percent margin in a difficult year) failure to perform well can mean negative margins. So, when the VBP program became active, the hospital’s CFO asked for monthly updates during the performance period.

How tableau was used to analyze VBP

The second basket was made up of patient experience measures, such as how well patients communicated with their nurses and doctors. Performance for each measure is counted in two ways-compared to national benchmarks, and improvement is compared to a baseline period from 2010. In addition, a consistent grade contributed to a minimum score goal to ensure that the hospitals were motivated to do well in all areas. All of these scores are then blended into a combined score.

Part of what made this interesting is that even though southern Maine’s management team had a good idea of how much revenue would be at risk (one percent of projected DRG payments), they did not know how much might be retrieved  through VBA.

After the performance period was over, Medicare combined the scores from all over the country and pooled all of the withheld money, then ran that through an algorithm to generate a multiplier. In other words, southern Maine hospital’s performance was being graded on a curve, with their ultimate revenue gain or loss depends on the “Final Linear Exchange Function (FLEF).” This function became the input to a model that southern Maine created to analyze the effect of the FLEF on the hospital’s profitability.

The original profit model was built like many projection spreadsheets; any time Jonathan wanted a new range of numbers he had to make a copy of the excel workbook. There was no view over time, and no per measure gain or loss, only the range of the one big number. Jonathan’s mission in the quality management  department is to look for places where they can take action to improve patient safety and quality of care.

After dissecting the spreadsheet to understand the algorithm used by the American hospital association to derive the values, Jonathan generated a table of data in excel, and pulled all of the results into the tableau. Later in the same day, he was able to create a dashboard in a tableau that allowed them to view changes from the prior month, and quickly see which measures had the most potential loss and/or smallest gain. Figure12.8 shows the resulting dashboard. For confidentiality reasons, the extract numbers have been hidden. 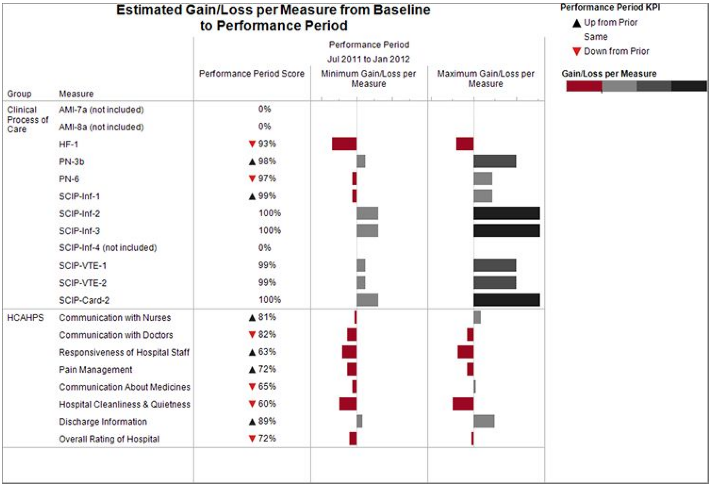 Source: Case study and figure contributed by Jonathan Drummey,southern Maine medical center .
This dashboard helped southern Maine to focus on the patient experience scores. Instead of just asking  the staff to do a better job, executive leaders (VOs and above) regularly walked through the floors and used to talk with the staff. They realized some great improvements were achieved within a short period of time.

The Tableau was also used to monitor per-measure performance over time. You can see an example dashboard in figure12.9.
Source: Case study and figure contributed by Jonathan Drummey, southern Maine medical center. 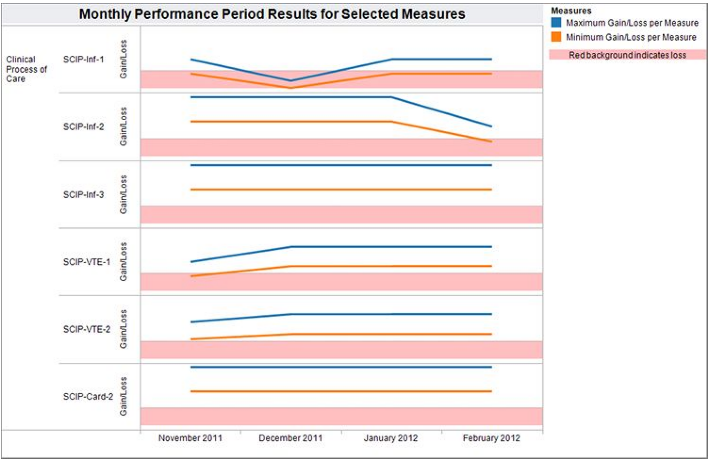 As you can see that big dip for February 2012 next to SCIP-inf-2 reflects a single failure to prescribe appropriate antibiotics prior to surgery. Going  beyond the fact that a patient did not get the care they deserve and the complications that may have resulted, that single failure-which reduced their score from 100 to 99 percent-costs the hospital thousands of dollars in VBP revenue.

This dashboard instigated an inquiry, and they discovered that a temporary surgeon was responsible for the error. They also discovered over time that most of their surgical measure failures were due to temporary surgeons that were less familiar with hospital procedures. This pointed out two areas for improvement, one for training, the second that they could incentivize the temporary surgeons with either bonuses or penalties for “core measure” failures during their contract.

These dashboards enabled a process that provided southern Maine with an opportunity to quantify the quality improvement in dollar terms. They have two registered nurses who do the concurrent abstraction of the core measures (that have complicated rules for inclusion and exclusion). They are sometimes able to identify gaps in care, work with staff to correct the issue, and prevent an exception in the measure.

A lunchtime conversation led to questions about what would happen to their VBP numbers if these nurses weren’t catching these “near misses” within a few minutes. Jonathan was able to re-run the core measure numbers to identify what their performance scores would have been if all the near misses had been actual failures. These prospective results can be made to show clearly in the tableau.

In this way, Jonathan was able to show that the savings generated by the concurrent abstractors were more than their salary. In the fall of 2012, Medicare published the final numbers for value-based purchasing, and southern Maine came out in the black, receiving (1.024 percent). This placed the hospital in the top quartile nationally.

Jonathan provided this case study in early 2013. Southern Maine continues to monitor progress using tableau in this way because they were able to create a meaningful and actionable analysis that was directly translated for better patient care.
End Notes: These are the three ways through which tableau is empowering health care executives to make better-informed decisions: