Planning for a successful tableau deployment at ACT

The ACT is a non-profit organization based in Iowa City, Iowa. It provides a variety of testing and assessment services. You might have probably heard of the ACT test-a college admission readiness test that was administrated to over  1.6 million students in 2012. Tim Kuhn’s is the principal of innovation,  research and analytics evangelist at ACT, and is responsible for finding new measures for the organization to analyze, understand, and communicate information within the organization. The ACT organization has been providing testing services for over fifty years now. They have a lot of data.

To gain in-depth knowledge and be on par with practical experience, then explore "Tableau Training Course". Enroll now!

Tableau Drive is a methodology for scaling out self-service analytics. The drive is based on best practices from successful enterprise deployments.
The introduction and expansion of tableau within ACT are driven by four primary observations made during their initial assessment:

In addition, tableau’s licensing model enables ACT to start with a small investment, prove value, then expand as the user base was trained and value-proven, and hence naturally increasing the demand.

[Related Article: Learn What are the licensing options for tableau server and tableau online?]

Building user base interest and skill

The ACT’s tableau deployment is aggressive but also controlled at the same time. They came up with innovative ways to spur interest and build competency. A visual analytics shoot-out completion was held early in the deployment to encourage desktop users to build skills. Prizes were awarded to the top entries and participation rewards were presented to all of the attendees. This built team competency and doubled the enthusiasm across the organization. If you’re considering a large-scale tableau deployment, this staged rollout provides a good template to follow.

A properly staged evaluation and roll-out

With the inception of the demo on the tableau in September of 2011, ACT went through several stages of awareness and usage.
First two months – initial evaluation

Next four months – train and deploy

Next five months – increasing the number and variety of uses

This deployment plan considered all of the key needs that are applicable to every type of organization. The initial evaluation phase was thorough and quick. Once the decision was made to purchase a significant number of licenses, a consultant was hired to provide customized on-site training that uses ACT data to build competency so that more users can come in. The training was supplemented by inviting a well-known data visualization expert to provide additional training, and a visual analytics contest encouraged early usage. It also rewarded the finest contestants with prizes.

In the first age of analytics, they saw early democratization of data where the financial analysts would work with data—there wasn’t much data at that time—and they would apply ledger pads and graphical paper as tools to make their representations. As we evolved into more of the information age, data grew and organizations built IT departments and started to store all this data in data warehouses. The problem became how to make it meaningful? How to create something that’s usable to drive action? And that’s where Tableau is really changing the way we’re able to work with our data.

ACT generates a lot of test data and is one of the most obvious use cases for tableau was evaluating the test score results. Figure12.10 shows an example.

The scoring distribution dashboard provides data on score distribution via a histogram. Less obvious is the ability to change the distribution viewed from a composite score to individual test section results. The scatter plot provides comparisons of student count and score results with average results being displayed via a reference line. The bar charts on the right-side of the dashboard allow consumers to view results for a variety of parameterized dimensions.

ACT continues to broaden the ways through which tableau can be utilized, including test material usage by geography and stage of completion, job profile analysis by industry for other ACT test products, security resting and investigation, response analysis, and production performance.

Tim and his team have adopted best practices to ensure the continued expansion of the ACT team’s competency by establishing policies to ensure continuous communication, creating an internal help desk, implementing on-demand question and answer sessions with an experienced consulting partner, and also establishing an internal user group to share the team’s best ideas and also provide examples to follow (less experienced users).
Source: case study and figure is contributed by Tim Kuhn, the ACT organization. 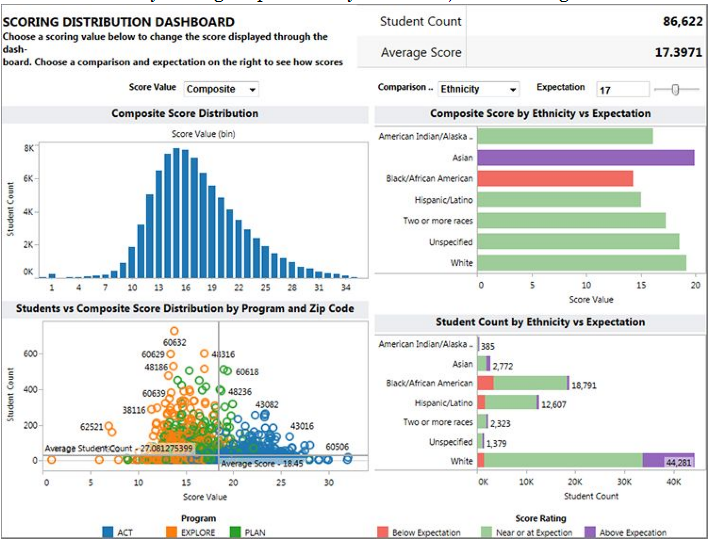