We often used to compare things with each other to find out the best insights to choose one of the things. It is the best way to get valuable information and a great understanding of the products. For example, a Comparison between Tableau and IBM Cognos, Understanding the difference between TCP and UDP, so on. Likewise, the trend lines in Tableau is used to estimate the relationship between the variables. So What is the Trend line in Tableau?

What is the Trend Line in Tableau

This way, the trend lines in Tableau helps to interpret the data trends, estimate the future scenarios, and define the relationship between the variables in the analysis.

In Tableau, there are various types of trend lines classified depending on the model. They are as follows:

Where X is an explanatory variable, Y is the response variable, b0 is the intercept of the line, and b1 is the slope.

The Linear trend line represents the simplest trend model estimating the relationship between the variables of whether b1 is increasing or decreasing at a steady rate and thus resembles a linear pattern.

Here, ln(X) is the natural logarithm of X.

So, the values were plotted in the view are established by connecting several explanatory values is used to discover the value of ln(Y).

Then, the values were plotted. The exponential trend line model displays the following formula:

Here, b2 represents the value of exp(b0). And no negative values are defined in this exponential trend line.

By the power model, the two variables are converted by a natural logarithm, before model estimation developing in the formula below:

Then, the values are plotted in the trend lines. And no negative values are defined in this trend line. Those values that are less than 0 have to be filtered before the estimation of the model.

Select the degree that lies between 2-8. When the polynomial degrees are high, it inflates the comparison between the data values. If the data increases quickly, the lower-order terms might have no variation when compared to higher-order terms, and it is also difficult to estimate the results accurately.

There are several values that appear when we see the relationship for the Trend line model. The below table describes all the terms as follows:

How to Add the Trend Lines in Tableau?

When we add trend lines to a view, you can specify how we want to display them to present attractively. To add a trend line to a visualization, do the following steps:

1. Click the Analytics pane. Drag the Trend Line in the list and drop it into one of the Trend line models. 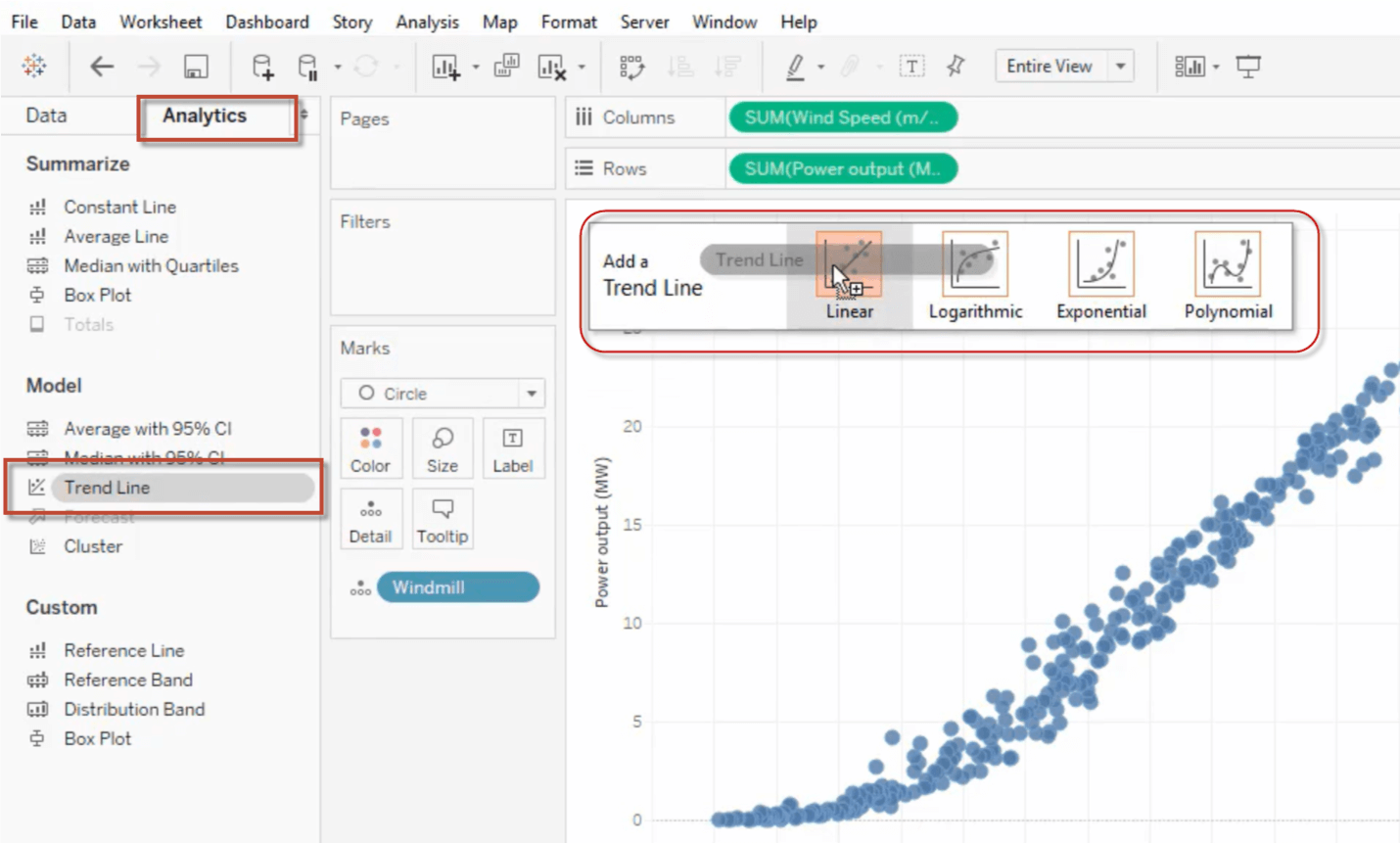 2. After selecting the linear trend line, the trend lines appear as per the data. Drag and drop the required Dimension into the Worksheet to have a clear data analysis. 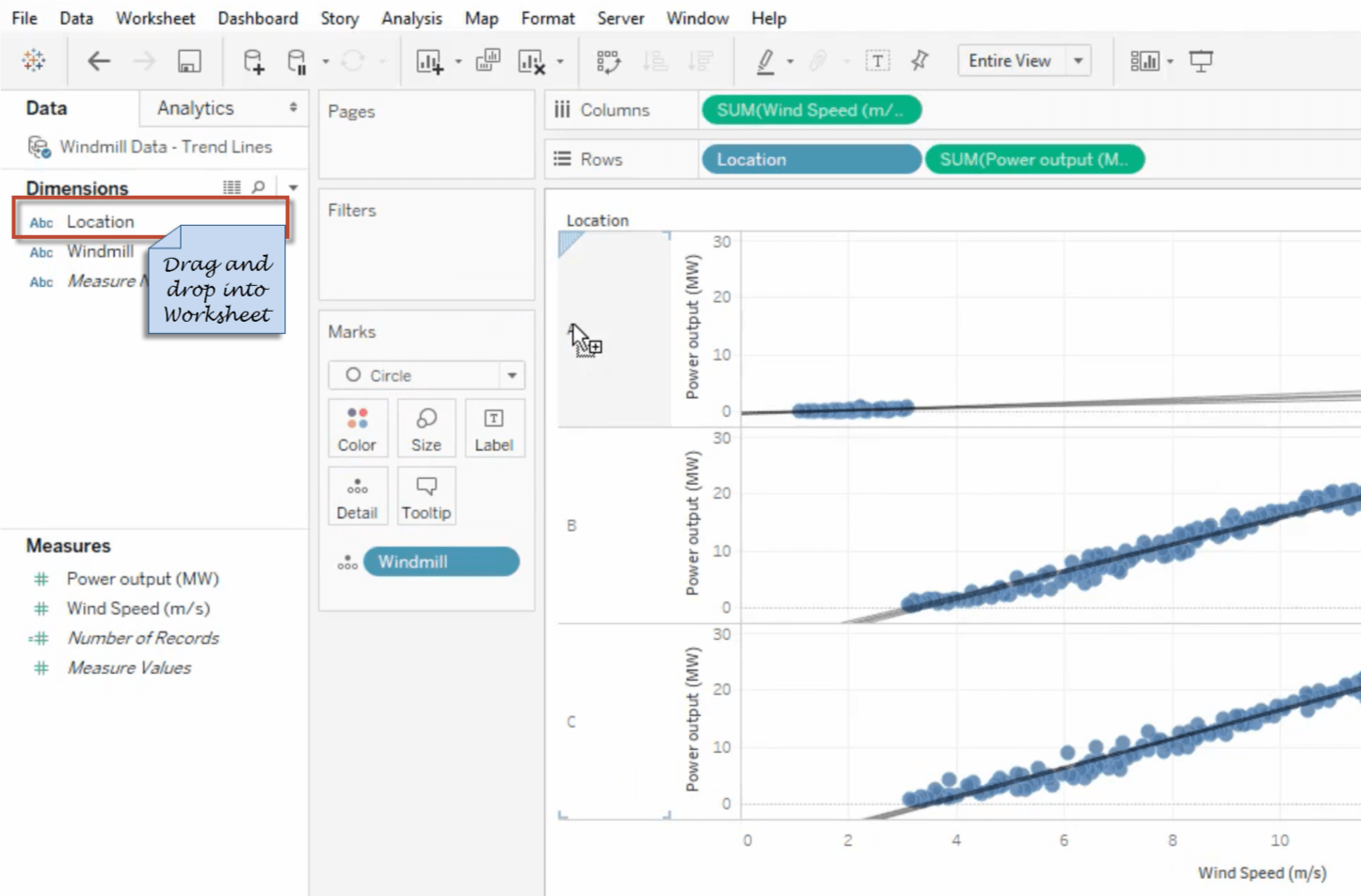 3.  Each trend line can be color-coded to the data it represents perfect visualization.

We can not add the Trend line to a view that the Product Category dimension, which contains strings, is on the columns shelf and the profit measure on the row shelf. However, you can add a trend line to view the data over time

How to Edit the Trend Lines in Tableau?

To edit the trend, do the following:

1. Right-click a trend line in the workspace, and Click Trend Lines, and then select ‘Edit Trend Lines’ in the list as shown in the figure. 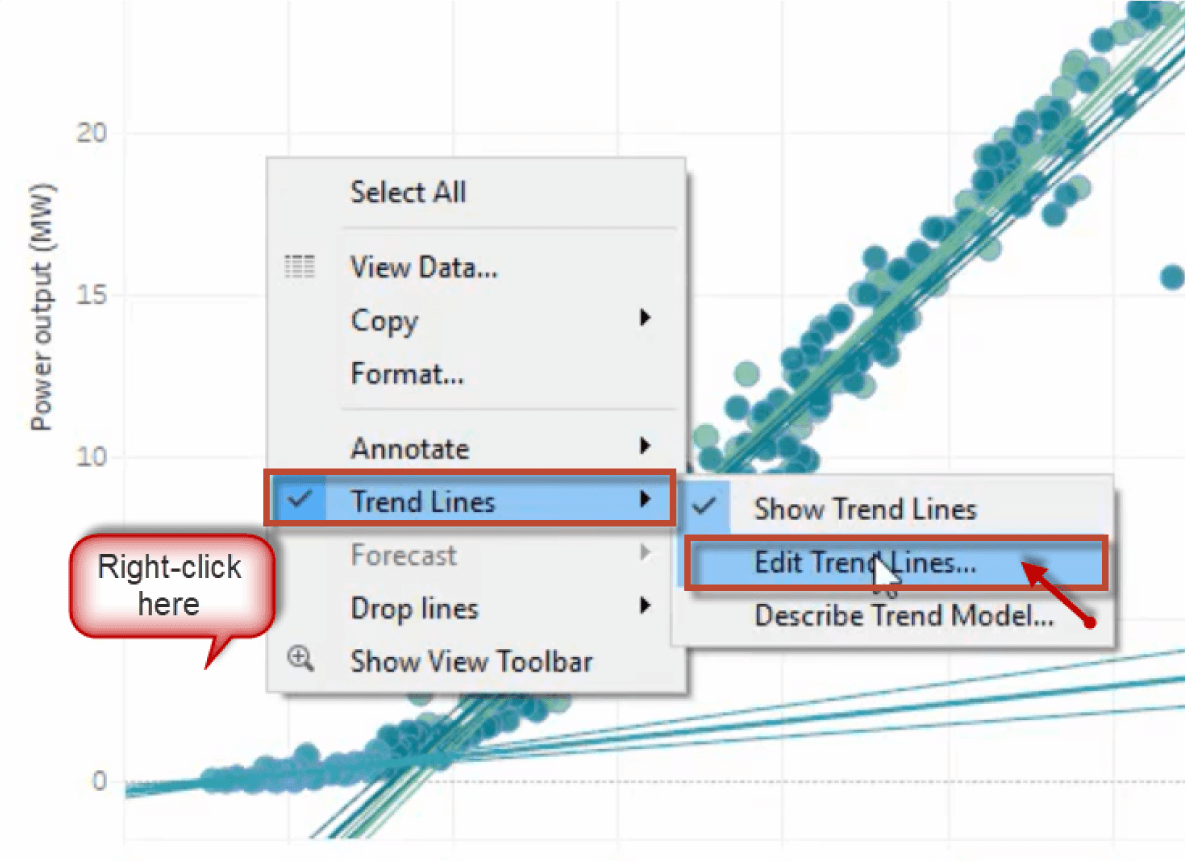 2. A ‘Trend Lines Options’ window appears, In that, we can configure the following options to edit the Trend Lines. 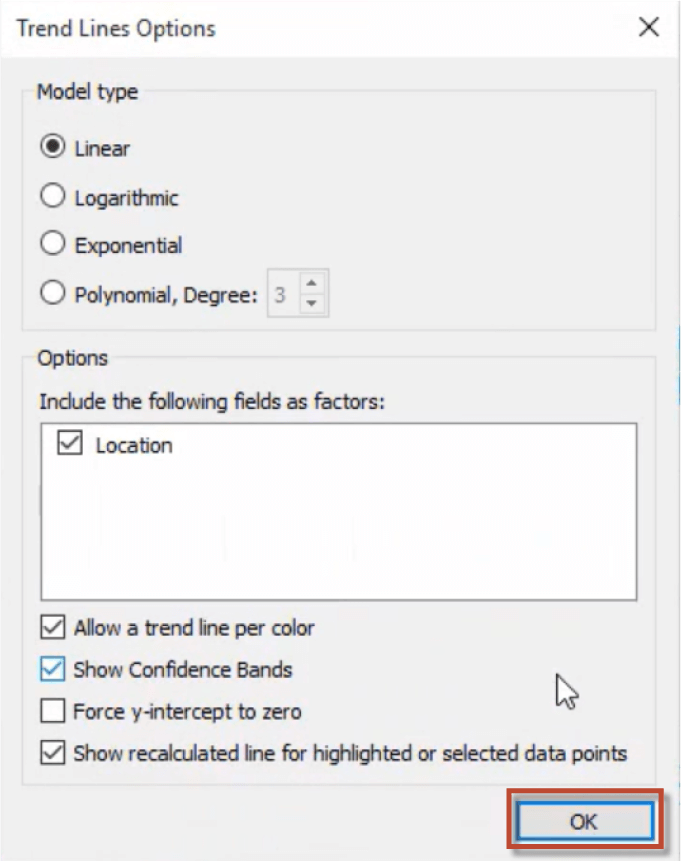 3. Using all the options, we can edit the trend lines as per the requirement to make the data for clear representation.

How to Remove the Trend Line in Tableau?

To view the significant information of any specific trend line in the worksheet, float the cursor to the trend line. It shows the details of the trend line, as shown in the figure.

The first line represents the ‘Profit’ value and the ‘Year of Order Date’ as per the data given in the trend line.

The next line gives an R-Squared value; it is the ratio of variance as defined by the model, to variance within the data.

The Last line represents a P-value that is the probability of that equation present in the first line provides the random chance. If the p-value is small, then the model is more significant—the p-value with 0.05 or less than is usually considered as adequate.

The trend line is required to have a good model, that is the value of the quality of the model’s expectations. Also, we focus on the importance of every factor of the model. The following step provides a way to view these values.

When a p-value is less, it represents the variation in an unexplained variance of models with or without relevant measure is the result of a random possibility. This p-value compares the entire model fit to the model fit determines the average of the data. It accesses the explanatory trend line model of a quantitative term in the formula, which can be Linear, Logarithmic, Polynomial, or Exponential with the fixed factor. We can access significance by using a ‘95% confidence’ method.

With the use of an ANOVA table, every field is termed as a factor in the trend line model that is listed. In the given figure, a p-value represents how the field is added to the significance of an entire model. The values displayed in each field are defined and is compared with a model that is not included in the question.

For the ANOVA model, the trend lines were described using the mathematical form:

Here, Y is the response variable that corresponds to a predicted value. X is an explanatory variable, and e is a random error. And the * is a specific matrix that corresponds to the category fields works as a multiplication operator to make the two matrices with the same no. of rows and returns the new matrix. For example, if factor1 and factor2 have three variables, then nine variables are produced in the trend line model formula.

On wrapping up, the trend lines will be the best fit in advance with a few clicks and make the decisions more simple with no scripts and no coding required. In this article, we have learned all the insights of the Trend Lines in Tableau such as How to add, edit, and remove the trend line along with the terminologies used in the Trend Lines, different types of Trend Lines model, Significance of the model, and few assumptions to create a trend line. I hope you find relevant information.