This "AWS Config" article will assist you in getting started with the AWS Config Service and understanding the associated terms. These include Amazon Configuration Variables, AWS CLI Configuration, AWS Configure Commands, and more.

AWS Configure at Amazon is used to track all the configurations from the AWS resources that are interlinked with your AWS account. You can also use this AWS configure option to get the historical and current configuration for each and every resource of AWS by availing the relationship between the resources. The AWS resource in configures can be consists of Amazon EC2 instance, EBS volume, ENI (Elastic Network Interface) or the security group. The AWS configure is used to access and manage the account with the help of the AWS management console with the help of the AWS command-line interface.

The following are some of the configuration variables in the Amazon according to the config file: 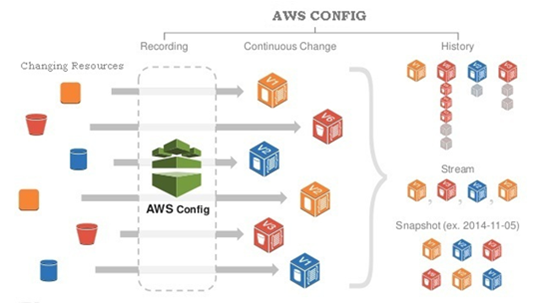 The following section is going to explain the steps on how to configure the setting with AWS CLI while interacting with AWS accounts like default region and security credentials. Before going to start the process, it is advisable to check the computer's time and date. Otherwise, the request that you are processing for the AWS will reject it.

This quick configuration concept can be used for the general purpose which can configure the AWS command within a fraction of seconds in order to set up the whole AWS CLI installation process. Generally, this AWS CLI concept will prompt in the four-stage of information with the account credentials like AWS access key ID and the AWS secret access key.

Basically, the access keys may consist of the ID and secret access key that are specifically used to sign the entire programmatic request in AWS. Don't you have any access keys? Then you can also create them by using the AWS management console. It is recommendable to use the IAM access keys instead of the AWS root user access keys, as it lets the user control and secure the access of AWS resources and services contained in your AWS account.

Coming to the configuration settings and precedence the Amazon CLI will make use of the provider chain from the base of AWS credentials contained in a various number of places, which includes the user environment or system and local AWS configuration files. However, the AWS CLI in Amazon will look over the configuration credentials and be set in the below-described order.

1. Command line options: In this region, the output format and the profile must be specified and described as one of the command options which override according to the default settings.

3. AWS credential file: This file is located at .aws with the respective credentials on MAC, Linux or UNIX, which contains the multiple named profiles along with the default one.

4. CLI  configuration file: This file is typically located as same as in the AWS credential file with .aws config on Unix, Mac OS, and Linux, which may contain the default named profiles along with the specific configuration parameters of CLI.

5. Contains credentials: As all these services are provided by the Amazon EC2 instance which is used to assign the role for your task.

6. Instance profile credentials: The credentials contained in the Amazon configure are specifically used on EC2 instances with a particular role that can be delivered via the Amazon EC2 metadata service.

This Add command in the AWS configure is used as a services JSON model in order to choose the perfect location that contains in the AWS model. Once the model is added to your AWS account the CLI commands and Boto3 customers will automatically be available in the JSON model.

This command is used to list out the AWS CLI configuration data, which will automatically display the data easily. For each and every configuration item, it can show the value where the value can be retrieved through the variable names. By considering an example, you can also provide the perfect AWS region in the environment variable that will show a command of the region.

If you interested to learn AWS and building a career in Cloud Computing?  Then check out our AWS Certification Training Course at your near Cities

These courses are incorporated with Live instructor-led training, Industry Use cases, and hands-on live projects. This training program will make you an expert in AWS and help you to achieve your dream job.

Prasanthi is an expert writer in MongoDB, and has written for various reputable online and print publications. At present, she is working for MindMajix, and writes content not only on MongoDB, but also on Sharepoint, Uipath, and AWS.