If you are looking for good-stuffed material to learn AWS VPC concepts in-depth, take away all your worries. You have landed on the right blog. This tutorial will help you to know more about AWS VPC. Know that AWS VPC is the virtual networking environment where you can launch the AWS resources. In this tutorial, you can learn default and non-default VPCs, subnets, DHCP options sets, and more. Not only limited with this, but you can also learn a lot along the road.

AWS VPC stands for Amazon Virtual Private Cloud. AWS VPC enables you to launch AWS resources in your virtual network and take complete control over your virtual networking environment. Know that this network will function as the actual network in your own data center. With AWS VPC, you can create subnets, add gateways, add subnets, and associate security groups. Besides, AWS VPC supports both IPV4 and IPv6 addressing protocols.

In this tutorial, you will have insightful content on AWS VPC in terms of AWS VPC peering, the stages of implementing AWS VPC, DHCP options sets, and much more.

You know that AWS VPC is much-needed to launch AWS resources such as EC2 instances in the AWS Cloud and protect them safely.

Are you still wondering why AWS VPC allows users to replace their physical network with this virtual one? Then you need to know the following pointers, which will help you in this regard.

The Architecture of AWS VPC:

Security Layer: security groups effectively control the inbound and outbound traffic at the subnet level. In addition, Network Access Control Layer lists (ACL) act as the firewall and the additional layer of security.

Spare Subnet Capacity: AWS VPC is provided with additional subnets that will be used during scaling. 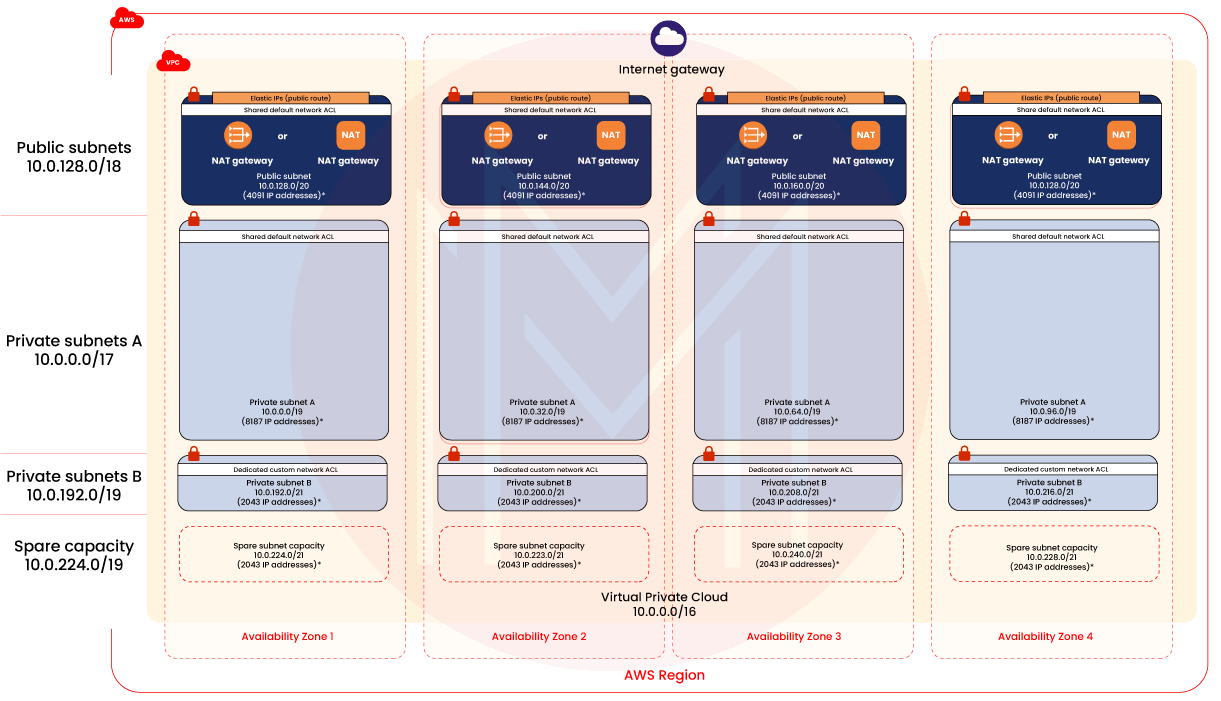 What are the features of AWS VPC?

AWS VPC is provided with fantastic features to enhance the security of AWS resources and achieve effective monitoring.

Let’s explore them one by one.

Flow logs: They are usually delivered to Amazon S3 and Amazon Cloud Watch in AWS VPC. Monitoring the flow logs will provide good operational visibility over AWS VPC applications and resources. Not just that, Flow logs allow you to analyze network dependencies and traffic patterns among the AWS VPC resources. Also, you can detect anomalies in the activities of applications and other resources by which you can prevent data leakages. Moreover, you can effectively troubleshoot network connectivity and configuration issues.

With the support of flow logs, you can identify the activities in TCP connections and packet-level traffic flow through NAT gateways. Here, the NAT gateway is nothing but an intermediate layer. Besides, flow logs help to meet the compliance requirements of AWS VPC.

IP Address Manager (IPAM): IPAM is the tool used in AWS VPC to manage the planning, tracking, and monitoring of IP addresses for the workloads. Also, it helps track the usage of IP addresses across many accounts and VPCs, which in turn helps monitor virtual networks closely. What’s more! IPAM automates assigning IP addresses to instances. 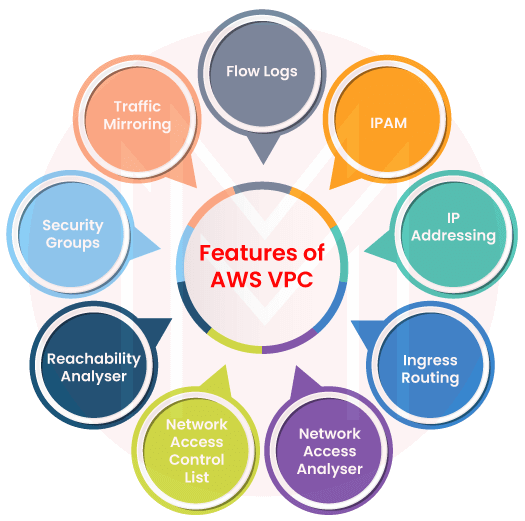 Network Access Analyzer: This is the tool used in AWS VPC to make sure whether the virtual network meets the security and compliance requirements or not. And this analyzer detects the accesses in the network that don’t meet the requirements. Simply put, a network access analyzer helps to improve the security and compliance of AWS VPC significantly.

Network Access Control List (ACL): ACL acts as a firewall and controls the traffic in and out of subnets. Also, it acts as an optional security layer, which supports secure networks in AWS VPC. One important thing to note here is that we can set up ACL with rules as it is done in security groups.

Traffic Mirroring: In this process, the network traffic is copied from an elastic interface of Amazon EC2 instances. Then, it is sent to security and monitoring applications so that deep packet inspection can be carried out. As a result, you can detect anomalies in the network and security, and gather operational insights about the AWS VPC. With this feature, you can efficiently implement compliance and security controls and troubleshoot issues.

What is AWS VPC Peering?

VPC peering connections can be made through IP addresses without gateways, separate network devices, and VPN connections. Because of VPC peering, there won't be any bottleneck issues and failures in inter-region traffic. In short, VPC peering acts is a cost-effective tool to share AWS resources between AWS regions.

What are Default and Non-Default AWS VPCs?

With Default VPCs, you can quickly launch public instances and modify components based on your needs. Each availability zone in a default VPC will have a public subnet. Also, default VPCs will have the internet gateway and settings to enable DNS resolution. In addition to launching public instances, Default VPCs also provide other services such as Elastic Load Balancing, Amazon EMR, Amazon RDS, and so on. 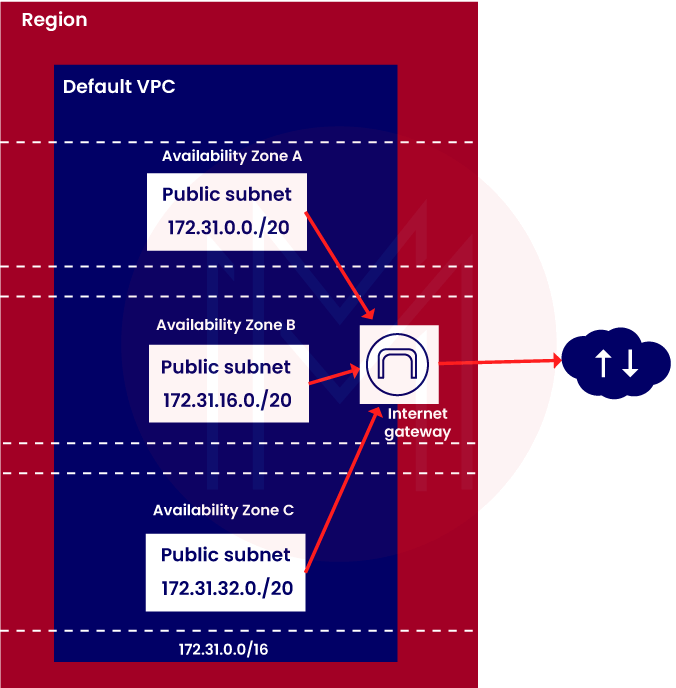 Non-default allows creating your own VPC and configuring it the way you need. Also, you can create subnets in non-default VPCs and add more subnets. These subnets are called non-default subnets.

What are DHCP Options Sets in AWS VPC?

Before diving into the concept of DHCP options sets, you need to know about DHCP and its role in AWS VPC. Know that DHCP refers to Dynamic Host Configuration Protocol.

DHCP options sets are the group of network configurations used by EC2 instances in AWS VPC. Also, they support EC2 instances to communicate with each other. You can disassociate all option sets from the AWS VPC if needed.

Know that AWS VPC supports two types of DHCP option sets. They are given as follows:

In this type, all the VPCs in an AWS region will use the same default options sets. Following are the network configurations that you can get through the default DHCP option set. 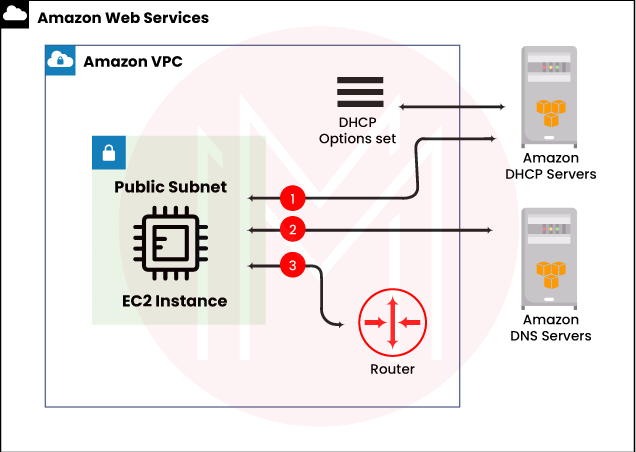 NTP Servers: These servers generally use Network Time Protocol for devices to synchronise their clocks over the internet. In AWS VPC, NTP servers manage the time of instances.

NetBIOS Name Servers: They maintain a list of mappings between NetBIOS computer names and network addresses of a VPC. In other terms, VPCs use NetBIOS for their naming service. It is applicable for the EC2 instances running on a Windows Operating system.

NetBIOS Node type: It provides NetBIOS names to IP addresses for the instances running on a Windows operating system. 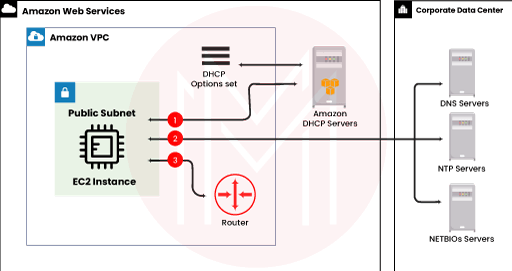 What are Subnets in AWS VPC?

Subnets in a VPC consist of AWS resources like EC2 instances. And they can be connected to the datacenters, internet, and other VPCs. Know that each subnet will have a separate IP address. Managing traffic in and out of subnets is accomplished by using route tables. In general, every subnet is placed inside an availability zone. Because of this, subnets don’t overlap between zones. This setup provides good protection over the AWS resources inside an availability zone. Therefore, if there is a failure in any of the availability zones in an AWS region, it won’t affect the subnets in the other zones. Moreover, you can add subnets in the local zones based on your needs. Here, the local zone is nothing but the AWS deployment infrastructure where you can place devices such as compute, database, storage, and others.

There are three types of subnets used in AWS VPC. They are given as follows:

Private Subnet: In a private subset, subnet traffic cannot reach the internet through the internet gateway but with a NAT device.

VPN-only Subnet: The subnet traffic is routed to a site-to-site connection through a virtual private gateway. Like the private subnet, the VPN-only subnet cannot reach the internet through the internal gateway.

Let’s look at the key features of the methods below:

IPv4 Only: This subnet will have an IPv4 CIDR block but won’t have the IPv6 CIDR block.

What are the stages of implementing AWS VPC?

Implementation of AWS VPC is performed in three stages. You need to just follow the below:

How to get started with AWS VPC?

AWS VPC allows creating AWS resources in subnets. Note that you can use default or non-fault subnets based on your needs.

This tutorial will help you start with AWS VPC using default subnets with simple instructions. Right! Get on board to experience the same.

You can view the configuration of the default VPC by following the below instructions.

Step 2: Launching an instance in your VPC

In this step, you will get to know launching an instance in a default subnet in an AWS VPC. And the Amazon EC2 console offers default values for the instance configuration. This process helps to start with AWS VPC quickly. Once you select the AWS region, AWS will automatically select the default VPC for the region.

Now, execute the following instructions to launch an instance in your VPC.

Step 3: Connecting the EC2 instance in the public subnet with the home network

The EC2 instance you created in the public subnet can be accessed through the internet. With SSH or remote desktop, you could connect to the EC2 instance from the home network. Know that you can connect with both Linux and Windows instances from your home network.

Step 4: Cleaning up or terminating an instance.

You could terminate an instance once the job is done. Therefore, you can avoid any further charges for the instance. The instance will be displayed in the console for a while once you terminate the instance. Note that you shouldn't delete the default VPC.

By following the below instructions, you can terminate an instance:

Congrats! You have learned how to launch an instance from the AWS VPC. And you know how to connect an EC2 instance with the home network and terminate an instance.

You can create, monitor, access, and manage the AWS VPCs through the following interfaces. Let’s take a look at them now:

AWS CLI: AWS VPCs and other AWS services are accessed using commands in this interface. It supports all platforms such as macOS, Linux, and Windows.

AWS SDKs: They provide language-specific APIs and manage the key tasks such as calculating signatures, error handling, and request entries.

So far, we have seen the features of AWS VPC from a technical point of view. Let’s know the business benefits of AWS VPC as listed below:

Let’s wrap off! You might have learned the basic concepts of AWS VPC, various features of AWS VPC, default and non-default VPCs, and many more. We hope that you might be familiar with getting started with AWS VPC and launching EC2 instances in an AWS VPC. With essential details, we have covered VPC subnets and how security is managed in AWS VPC. We are confident that this tutorial might have enriched your knowledge in AWS VPC a little better than before.